Disclosure: I’m a judge for the Choice Music Prize

is what some people will probably be saying when Jimbo Carroll makes them feel special. And they should feel special. The Choice Music event is a great thing. Hat tip Sinéad. 🙂 Hope you didn’t fall off your seat when you saw the title.

A change is going to come, I can feel it – Irish Web Industry Association?

Paul Walsh has made a call to get something started in Ireland:

Iâ€™ve previously grumbled about the lack of support in Ireland for Web based companies. Heck, Enterprise Ireland doesnâ€™t even have the word â€˜Internetâ€™ in the â€˜Industry sectorâ€™ section of their application forms for grants etc. What does that tell you?

If youâ€™re interested in helping me improve the ecosystem, please join me for dinner in January

There are so many things I want to say on this but I just don’t have the time right now. There’s a dinner in January to talk about this and act on this. Watch the Segala blog and do come along.

I’ve had my run-ins with Walshy in the past and people ask me why I’m friendly with him after I exchanged such strong words with him before. The reason is that the more I see him work, the more he impresses me. He doesn’t suffer fools gladly (sounds familiar) and like Fergus Burns he’s a networking machine. And again like Fergus, it’s not the Irish definition of networking which is comprised of gathering and then selfishly hoarding contacts (another blog post on this will follow), it’s all about “This is so and so, you should talk, you work in the same space and exchanging information will help you both”. Paul has made a name and a rep for himself in London and further afield because of the events he organises and he’s done a great job with BIMA and all their events.

If Paul can do the same in Ireland as he’s done in the UK then that’s a very important thing for the Web industry here. In the meantime I’d strongly recommend that Irish companies that are serious about doing business in the real world outside of incubation centres should be getting cheap Ryanair flights to London every now and then to attend many of the networking events that are on, on a regular basis. The quality of the contacts is worth the travel costs and time used up. See you in January in Dublin!

Elly is working on a nice interactive map of Europe for tourism and such. Have a bash!

Maryam Scoble lists some good places to visit next week.

Death by a thousand cuts. More contradictions to Bertie’s tales.

Lessons for educational publishers in a social media world.

Robin muses about Pixenate and what he’d do with it. He talks about offering a service for bloggers to edit pictures. I’d like to add that I’d take the Facebook widget that already exists and make it a blog widget so people can play with Pixenate on all their friends’ blogs too and mess around with their pictures with an export option to a new Pixenate account. BTW, Robin is on my “ones to watch” list for 2008. Get to know him before he becomes well famous and charges 25k to turn up to talk at a BarCamp.

Haha. The Pay Per Post folks are getting impatient with their dealer.

The new Knight Rider car. That’s a macho machine. KITT in the 80s was uber-camp. But then so was the Hoff.

Wouldn’t it be great if Google Ireland would support an Open Mapping Initiative which would make their maps much much better? Not like the OSI will give away anything for free.

I’m way behind on everything since last week. I’ve unanswered emails from last week, blog posts still in draft, an article to write for ENN, interviews to answer and more. Early last week I picked up some virus, or at least we think it’s a virus. It started with ringing ears on Wednesday and on Thursday I got pins and needles in my left hand and foot. This spread to my whole left side on Thursday and Friday and a nasty headache kicked in too. My concentration was wiped and I could barely answer a text message. By Sunday my whole left side was numb so I thought it time to see a doctor. Went to Southdoc and they told me not to worry, it wasn’t an aneurysm or anything so see my own GP come Monday. 60 quid for that. Cheers. Well it seems to have been a viral thing, which can’t be treated. As of today most of the numbness is gone and my concentration levels are going back up. Proper two-post-a-day blogging may resume shortly, once I sort out all the emails and other stuff.

Paddy’s Valley gets better, now confirmed to visit Meebo and to go drinking with the Scobles and Loic le Meur and anyone else that wants to come along.

Both Donncha and AJ point out the latest ads for eircom broadband that try and embarass people into buying broadband. ICAN are the ad agency that have done them and the ads are the most absolutely fucking moronic thing I’ve seen in a while. ICAN said at a recent conference organised by the IDMA a few weeks back that these ads are to encourage people to get broadband at home and not surf in the office during the day. Yes, cos you go red from the ad and you think “eircom is right, I’ll buy their broadband now.” Eh no, I’d try and find the idiot that came up with this ad and introduce them to a lumphammer, though, that’s how they probably managed to concoct such a stupid idea on day one.

More proof that ComReg lie. They say we talk more than the rest of Europe. OH NO WE DOESN’T. The mobile phone bankrolled TIF then say we have higher bills because we text more. Oh please.

Shrooms (the filum) very very selectively quotes from the Irish Times review of the movie. I bet if the review said SHIT, the morketing droids would quote it as HIT.

Boards of Canada – Music Is Math 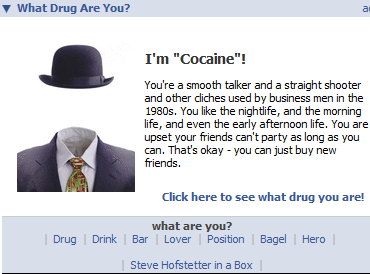