The line between bravery and stupidity…

Some of these bike crashes are just awful. I had to stop watching the first one. I think to watch it through I’d need lots of beer and more fellow evil friends:

Got the below and I have to say it looks really interesting. Might head along.

20 November 2007
An International eGovernment/Public Sector Knowledge Management event, co-organised by Dublin City Council and DIT. The event is part of ICiNG (Innovative Cities for the Next Generation) which is a project funded through the European 6th Framework Research programme. It aims to develop effective e-communities and e-access to city administration. The project is based in Dublin, Barcelona, and Helsinki. Each city is providing â€˜City Laboratoryâ€™ test-bed sites in strategic development/city regeneration locations where users will trial and evaluate technologies and services.

10% discount on bookings before Friday, 19 October.
Conference delegate registration is €195.
Book 4 delegates for the price of 3.

I really don’t care about people being murdered in Burma

I’ve not done any of that because I don’t really care but I’m sure I’m alone on this and being my usual contrarian self.

Twink – Still a crazy after all these years

Link to her on liveline where she croaks and screams and just goes, well apeshit.

The Net Visionary Nominations are out and I have been nominated in two categories, Social Contribution and also Technology Journalist. I’ll get to the journo one later.

There were a few nominations for me for social contribution and I was told by one of the people that nominated me that it was my work with IrelandOffline over the past three years that got me their nomination and this is the reason I accepted the nomination. (Last year I declined as I was still working in IrelandOffline). I have been told by those behind closed doors (which in itself is a shame) that IrelandOffline was more than a thorn in the side of telcos and the Government and the pressure via public and private was enough to drastically speed up broadband rollout in Ireland as well as reducing line failure rates. It also taught certain regulatory groups to think twice before trying to pull their usual statistic scams.

With the Irish telco market being such a small space it is annoying that all those that helped IrelandOffline can’t be publicly thanked for their work but that might make their lives in eircom, Comreg, the DCMNR, the Taoiseach’s office, the EU and numerous telcos a lot more difficult. I accepted the nomination on behalf of all these people, not me and also on behalf of the committee members and chairpeople of IrelandOffline over the past few years, each one of which deserve their own award for the work they did, most of it probably went unrecognized. All those who also helped out via the Boards.ie forum and via direct contact also made a difference. Combined everyone helped the drip drip dripping which eventually wore away the calcified opponents to broadband roll-out. One person I will highlight though is John Timmons who did a huge amount of work in the background while bigmouth here got all the attention. I’m not sure would IrelandOffline have lasted as long as it did without John.

I’d like your vote so all the above people can be thanked and would like if you could spread the word too to your friends and readers if you have a blog. The broadband issue is far from over and the regulatory environment is still woefully bad and vindictive but the work done so far should be rewarded. You can go here to vote and choose who you want to vote for. Social Contribution is the one I’m down for. Check out the blogger and podcaster category too, you might know some people. Any of the public can vote too.

Yeah, a nomination for Best Technology Journalist. I’m only doing this for 9 months but it is nice to be considered. Vote for me if you like but I really would like your vote for Social Contribution. Thanks.

And we’re back. Thanks for missing us.

The Centre for Criminal Justice and Human Rights, UCC now have a blog.

Jim celebrated his 6 months blogging this week. I must say the Irish Times staff that have started blogging have certainly made an impact on the blogging scene in Ireland and I’ve learned a lot from Jim and Shane and Conor and it is wonderful to see some personality on blogs from the mainstream press. More blogs from the Irish Times staff please! And of course Harry McGee from the Examiner is a fantastic read too.

HP have a photography competition for school kids in Ireland. Get your kids and siblings or yourself to submit photos!

Via BoingBoing is the new book from Oliver Sacks (Remember the movie Awakenings? He wrote the book.) The Amazon book page has videos of him talking about music and the mind. Great short videos. Fascinating stuff. Wiki entry on Sacks.

Catchy and clever song from a kid: My whole family thinks I’m gay

Dan Le Sac vs Scroobius Pip: ‘The Beat That My Heart Skipped’

Yes. I was away and am stunned that at least 3 of you folks missed me. I was told I needed to get away so I headed off to Dublin for a few days and hadn’t time to be playing with the aul blog. Managed to see Feist and she was great, Halo 3 party was pretty much over when I got there but lots of drunken nerds being drunken nerds. After midnight the streets were full of Halo 3 fanboys who bought their games and a large percentage of them also bought consoles it seems. Yesterday I managed to get into the public gallery in the DÃ¡il when Bertie had to do his weekly Taoiseach’s question time and then FG called a vote of no confidence. FF countered with a vote of confidence and Bertie went on the offensive in a meandering wittering speech.

Enda then stood up and I was impressed with his oration but the thing was too long. Eamon Gilmore then had his go and a go off the Green party too. It was fun to watch all the banter and also watch the political reporters at work too. They have their own gallery that is not glass enclosed and is closer to the chamber. They’re all seated on a long bench with kind of reminded me of the last supper. David Davin-Power was there and Harry McGee and Fionnan Sheehan, Shane Coleman and lots of others. You could see how much a bunch of politics nerds the lot of them really are by the way they got excited and elbowed each other and scribbled like mad when Enda or Eamon got in some digs. Gilmore yesterday made their day whe he showed that the biting comments from Labour leaders are not just a Pat Rabbitte characteristic. Court Jester Conor Lenihan yesterday made some smart alec remark as Gimore was doing his speech and he just shushed Lenihan and asked “Conor, don’t you know they don’t let the clowns out during the high-wire act.” Looking forward to more of that.

Right, blog posts are in my head and will be written soon. La Caverna restaurant in Temple Bar is great by the way, shame they can’t speak Italian though 🙂 Oh yes, and Bertie looks like an egg when you see him walking around Leinster House, he’s hidden that gut well.

Whato chaps! While going for a reflective jaunt across the IrishBlogs.ie estate, I happened upon a post from a blogger who, while not taking umbrage with the way I carry and present myself, did helpfully point out that some of my inflections and tone could be on the coarse side. Rather.

It would seem that I am creating uncircumventable or near-uncircumventable language impediments into my communication flow which trouble him. Now, in plan english and in my natural voice:

Michele has an interesting post about people that use expletives in blog posts. Such as Twenty Major and of course myself. He doesn’t like them or use them at all on his blog, like many people, but I do use expletives as do many people around me, both friends and family. I don’t think Michele and I are going to agree on this or other things (bless lack of sycophancy), much the same way I think ads on personal blogs are vulgar and he, who liberally uses ads on his blog as liberally as I use expletives here, does not think that ads are vulgar.

There’s only one small part of the post that bothers me and kind of locks in on why I am against those that try and impose rules on how others communicate, either directly or in an off-handed alternative way:

other bloggers make use of expletives when they don’t need to.

I genuinely think attitudes like that are dangerous. The need is defined by the person that does the writing and communicating. If people are going to second guess themselves for the sake of others, I think this is unwelcome. Like I don’t think there should be a bloggers code of conduct, I’d worry that faux rules of civility would start to be imposed on others if we critique the choice of words someone uses, ignoring the overall message.

I don’t change the way I write from the way I talk. My blog posts are exactly how I communicate with others, expletives and all. I think if you expect people to change an essential, though small part of their character for the sake of constructed rules then it is the same as telling people to change their accent to something more “mid-Atlantic” because you find it harsh on your ear or brain.

Expletives are an essential part of all communication and language and if you remove some words, others will just take their place. That vacuum will be filled. You can express one word in 10 sentences or you can express 10 sentences in a single short sharp shock.

Update: Just to clarify a point in case someone got the wrong end of the Damien stick, I respect Michele and his opinion and if I didn’t I wouldn’t have given his post the time of day. We often argue and often agree and I like the fact that his post yesterday actually got my brain to work and to reflect on what I do. Also, one hundred euro reward for anyone that sends an mp3 of him cursing. 🙂

A while back I said I was looking to profile Irish tech companies. I now have a dedicated blog for this which is ProfileIreland.com and over the next few weeks and months I will do a profile of a technology company every Tuesday and Thursday. First one just went out. So there you go.

Owen Gallagher has created a nice resource for those into the whole remix culture and video mashup thing. TotalRecut.com The site is also in the final of the 25k Northern Ireland Innovation Awards and secured him a place on the 2007/8 NCGA Kauffman Fellowship entrepreneurship programme. 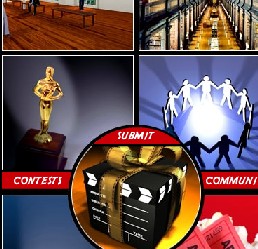 Total Recut provides online resources and social networking opportunities for fans and creators of video recuts, remixes and mash-ups. Users can watch videos or showcase their own work in the galleries, download copyright free source material to use in their own remix projects, learn about remix culture and copyright issues, undertake instructional video tutorials and enter contests to win prizes or just for fun.

Owen is a damned fine mashup artist but I dunno am I allowed say what he has done previously or show it. 😉 Anyways, check out TotalRecut.com

Posted in irishblogs, technology | Comments Off on TotalRecut.com – Mashup resources