The Dublin Web Summit was on last week and a huge amount of people went to see it. A great networking event from what I’ve heard. I’ve heard complaints too from those that do conferences in the tech scene that the conference somehow steals the lunch of other organisations. When is time, not effort, a right to maintain a monopoly? Jack Murray from Media Contact has started running social media conferences and digital conferences in the past while. “Pivoting” an existing business that was about a printed database being posted to people twice a year into using that database to bring people together and extracting more value from it. If it wasn’t for the Dublin Web Summit and the various Media Contact conferences in the past few years we’d just have the same ole same ole with pretty much the same Irish speakers on rotation. New blood, new talent, new takes on things. It’s good to see conferences becoming more competitive and new conferences taking over. In time they too will be usurped.

The Journal won at the Web Awards last week. I saw one person asking was it the “Best Copy and Paste” Award they won at the Webs. Humour that has truth to it is a great weapon. The Journal is about a year old and is the most disruptive thing in the Irish Web right now. Have a look on Google Trends for a rough idea how they are dominating breaking news. It’s fascinating how this product launched with momentum and is still gaining it. There are plenty of critics of it and plenty of internal chatter from organisations with even legal people consulted about the way they work. The Journal though is a web service run by a new generation, totally immersed in web culture and the new way information moves. The stature of the Irish Times, RTÉ and other media organisations in a way is their detriment and I can’t see how they can successfully react to this without first pretty much destroying their own organisations. What The Journal will do though is get these organisations to either take risks or do really silly things which will do more harm. Such is the cycle of things though.

Enterprise Ireland announced a fund this week to encourage startups to move to Ireland and people were complaining about the money not being spent nurturing local talent. There are plenty of social welfare for startup funds out there if people looked though. Bringing startups in to Ireland is a very good idea once they are a benefit locally. Experience and even philosophies being brought in to disrupt an existing industry is a very good thing. Dublin Web Summits bring wisdom to people for a few hours, this EI fund will bring new ideas for a much longer time. It might bring enough people that a creative hub establishes which will bring more people along too. The gravity from these centre of talents isn’t strong enough just yet. I think Malcolm Gladwell pointed out that when Tiger came along, the game of golf adapted and everyone got better to match him. Maybe we’ll get the same with this fund?

Eugene from Tweekaboo (a client) went off to Silicon Valley and got inspired. I met up with him this week and a short visit over there left an impact. It made me think of when we organised Paddy’s Valley and of course vowing to never do it again. Myself and others kept telling Eugene he needs to get over there and see how the tech and investment world works there. Getting talent to inspire you locally is good, bringing long-term talent to Ireland is also a very good thing, bringing new blood into a stagnant industry is a good thing but also going to where there’s an ocean of talent (and money) is an important thing. There are some tech tours (UK Centric) that go over to the Valley now and then and it’s worth sending people over once they meet and greet and don’t shy away from networking and feeding on the brains of wonderful tech people. Though Zuckerberg seems to think Boston is it.

And cross-pollination is great and is important but a worry is that you are still only learning from a subset of clever and engaging people. Why not leave art and culture inspire you too? Cross training in sport works. I recall my idea of trying to intern in some companies before to gain experience. Maybe some of those tech hubs should have artists around too to hang around with.

Posted in business, irishblogs, technology | Comments Off on Cross-pollinate

Lots of free books for your Kindle, you know.

Can Ireland become the biggest social and games hub? Thoughts from Dylan Collins, the guy that is working to get startups to move to Ireland as of this week btw.

In case you were wondering, you can use this service from O2 to block texts from people

A set of podcasts from the University of Oxford on reasoning, critical thinking and argumentation.

Bit Google overselly but the Zero Moment of Truth should be read by anyone selling online.

How To… Create a Basic KPI Dashboard in Excel 2010

Audiofu Clinic next Tuesday in Crane Lane at 8pm.

How Our Social Circles Influence What We Do, Where We Go, and How We Decide.

Mark Cuban on the Occupy Wallstreet movement. Good advice that can be used elsewhere.

From a marketing message, the Hello Divorce, Bye Bye Daddy posters were brilliant.

Trade – another ThisIsPopBaby production. I left this as a Tripadvisor review, the screenshot and text is below. Currently the review is pending in Tripadvisor. 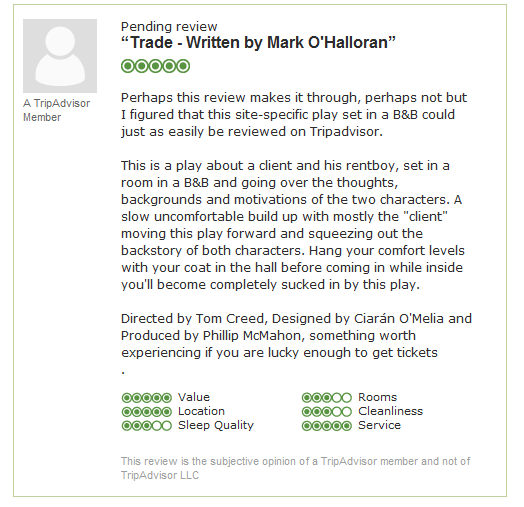 Perhaps this review makes it through, perhaps not but I figured that this site-specific play set in a B&B could just as easily be reviewed on Tripadvisor.

This is a play about a client and his rentboy, set in a room in a B&B and going over the thoughts, backgrounds and motivations of the two characters. A slow uncomfortable build up with mostly the “client” moving this play forward and squeezing out the backstory of both characters. Hang your comfort levels with your coat in the hall before coming in while inside you’ll become completely sucked in by this play.

Directed by Tom Creed, Designed by Ciarán O’Melia and Produced by Phillip McMahon, something worth experiencing if you are lucky enough to get tickets

Posted in irishblogs, The Arts | Comments Off on Trade – A review

A talk on emotion being a key part of marketing. I dunno. Not sure if this fully works. Also, you’re adopted.

A nice campaign from UNHCR. It’s called ‘do 1 thing’. You can support refugees and asylum seekers with the campaign by donating, campaigning or just learning a single fact and share what you’ve done. I like the fact that they really don’t push for donations. Other orgs in the charity space have been on record as saying they want donations and nothing more. Refreshing. The campaign runs until Monday 24 October.

Purchase.ie is an online store where you can buy eco-friendly products. Good name is that. Also they share tips for a more green halloween. Nothing to do with dressing up as the Hulk.

Lovely post by JP about Steve Jobs and how you can like his work and that of Apple even if you’re an open source supporter. And also reminded me to read this old Playboy interview that’s a fascinating insight into the man.

Tweekaboo gets nice coverage in the Business Post. (Disclosure: they’re a client)

Simon Geraghty is blogging about starting his own business and pine martins. Looking forward to more posts.

And on that. Giant giant list of apps/tools/resources for startups.

Netflix got into trouble from a lot of people for pretty much getting rid of renting physical DVDs but still paying the same for the service and then bringing it back as a sister business. One of the founders, now no longer there gives his take. He supports the idea and gives great insight into the history of the company. 95% of revenue was from selling DVDs not renting in year one and then they killed it off. Ballsy.

Nice post about the resurrection and plummet of Nixon both done via TV. Never heard of the Checkers speech before.

Facebook and photos. Holy crap, every photo online appears to reside there now.

The Business Post reports that a Government sponsored group, the National Substance Misuse Strategy Steering Group is looking at suggesting the banning of drink sponsorship of Arts and Culture events. There’s been talk for a long while too about banning drinks brands sponsoring sports events. So no more Jameson Film Festival, Absolut Fringe, Corona Cork Film Festival and the Guinness Jazz Festival?

Arts and Culture organisations will be even more moany if another source of funding is shut down. Government grants aren’t what they used to be. We’re in a recession so it’s harder, for some at least, to get corporate sponsors. Of course one can donate to an arts project without having to publicly be listed as a headline sponsor/sponsor. I’m sure many drinks companies will instead do this, given how they care so deeply about Irish culture. So says the press releases. Bit of Dáil discussion on it too.

You have to wonder about Arthur’s day too then. Will this artificially created calendar event get killed off too? It’s not “Guinness day” but is associated with it. No coincidence it was created just as worldwide drinks companies started seeing traditional marketing routes denied to them. Funds for social entrepreneurship, like sponsoring arts and culture events are another route to keep your name around if you’re a drinks company. I wonder will these be classed as sponsorship too. It’s nice that a fraction of revenue from a single day out of a year is spent to keep these projects sustained for a while.

There’s some great lessons to be learned from the arms race between the tobacco industry and various Governments over the decades. Now it’s happening with alcohol. I’m sure fatty foods will be next. For those that haven’t issues working for tobacco companies or drinks companies then there is serious money in change and disruption. Think of the euro changeover or the Y2K bug. Fortunes were made from it. Helping these companies find newer routes to market their products will get you that mansion sooner.

And of course with tobacco TV ads banned we get this instead, now if they ban drink and fatty food ads…