I have a spare ticket to Sigur Ros for tonight

Seems my 4th ticket just can’t keep on to an owner. Anyone in the Irish Blogs want a Sigur Ros ticket?

So today ComReg launches Callcosts.ie a website for Irish consumers to check mobile costs. I was asked by one or two journalists for comments on it. Dermott Jewell was on TodayFM last night saying how fantastic the site is as he got a preview. Dermott is also on the ComReg Consumer Panel.

I’ve written about my views on telecom prices in Ireland already. A website is a good idea to help people check tariffs besides having to go to 4 different sites to compare and contrast. However, this “shop around” excuse that people are given is to be quite blunt – bollox. The mobile companies are in a cosy cartel and a website which can only be reached by at most half of the population will not make significant impact. This was put to Jewell last night and he seemed to justify it by saying that at least people will know about the high prices. Right, like we don’t read our bills or go to the local shop and pay out on credit every day.

Here is a comparison of EU countries from a recent ComReg report. Ignore the Switzerland red herring, stuck in there to make Ireland look slightly better. Switzerland is not in the EU. 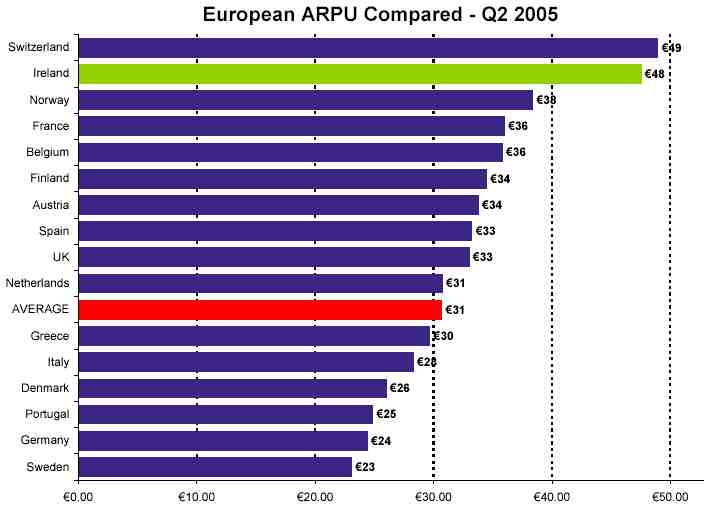 If you compare Ireland to the EU average we are €17 a month more expensive. €17! A website ain’t going to bring that down. Regulation might. Better and stronger regulation. So while the site is a very good idea, the fact that it is supported by all the mobile companies should start to make you go hmmmm.

Funny thing is the site is being launched by Eddie Hobbs, I wonder what he’ll have to say about the telecoms market in Ireland and how it’s regulated? I also wonder can the website be accessed via WAP, GPRS and 3G?

Every time you blog, God kills a CEO

Via Doc Searls which came via Saintperle which came from Pinko Feminist Hellcat. It is another piece ripping that Forbes article on bloggers into bits. The more the merrier. Loving the sarcasm in it though. The title is brilliant though.

Via James is a link to the Del.icio.us inline MP3 player

Going to http://del.icio.us/tag/system:filetype:mp3+irish will get you all mp3s with the tag “Irish”. Click on the ickle blue triangle on the left and the file will start playing. Inline media players are becoming quite popular. I really like the Google Video one, it appears to load really fast. Wonder will we see a Web 2.0 version of the Microsoft Media Player?

Via MeFi is a link to the Wikipedia entry on Michael Power – a Guinness marketing persona who has starred in his own movie to drive the Guinness brand in Africa. Not a fan of marketing but this seems like quite an interesting idea and it payed off hugely.

The campaign worked. Guinness led the African beer market by 50% in 2000. Brand recognition reached a reported 95%, and volume growth rose up to 50% in some markets.

kevin Burton on how Memeorandum can be rigged so easily. What is it with peoples love of that site? It’s so fucking ugly. It doesn’t seem to have the newest news more than the news everyone thinks is new.

BoingBoing talks about the Red paperclip meme. This started with a red paperclip and swapped it for something slightly greater in value. He wants to keep going til he gets a house. I wish him the best of luck. Like this quote:

About 100 people visited the site yesterday, and about 20 000 showed up today.

I’d buy an iPod just for these covers.

Think I’ll drop in and see this when I’m up in Dublin:

11.30am Questions and Answers

Posted in irishblogs, politics | Comments Off on Family Law – Rights Vs Reality

Newsvine – as intro’d by Om

Om Mailk talks about an interesting new News service on his blog. They’re called Newsvine. Says Om of them:

So what these guys have done is basically mashed-up traditional online news site with About.com, Del.icio.us and OhMyNews and created a rather interesting blend of citizen journalism.

Newsvine from what I gather take in newsfeeds from Assoicated Press and the like, allow tagging and allow you to add your own commmentary which will share space with the “professional” stuff. Adds Om:

So if you are a LA Lakers fan, then your columns could be featured right next to AP copy on a URL that will essentially look like Newsvine.com/Lakers.

But wait, this goes a step further and doesn’t just appeal to your vanity as it could make you money too:

This is good. There are a good deal of bloggers out there who are far better than some of the press release rewriters. Perhaps some could make a career out of this but I would think many will just make extra beer money but if they write about what they are passionate about and are under no pressure jobwise or financially to talk about crap they don’t care about, then we don’t see it.

I’m still ruminating the Newsroom.ie idea and it being a hub of citizen journalism. This could be a way to do it.

At Newsvine, we feel strongly that an articleâ€™s life only begins the second it is published.

Do as James says or else!

Irish woman gets top EU job. An Irish woman has been appointed as Secretary General to the European Commission. Well done Catherine. I’m delighted for you. It is well deserved. (That really looked like I know who she is. I have no clue who she is.)

Posted in irishblogs | Comments Off on Do as James says or else!

Tom started a discussion about online libel and a few others such as Gavin picked up on it and asked:

Anyone care to give him the good and bad news?

Given the fact that a fairly well known blogger around these parts got a cease and desist letter followed by a summons to the High Court over postings on his blog, I think the emerging Irish bloggersphere needs to realise the rules of this new world we are playing in. We’re free to post what we want but people and companies are also free to sue us over it. Digital Rights Ireland has put together the Digital Rights Ireland Pamphlet on Libel which every blogger, webforum owner, webforum poster and website owner should read and print off and attach to the side of their monitor.

Now, none of us in the group as far as I know are graphic designers, so if a logo expert or graphic designer would like to take the text and tart it up into a cute and stylish pamphlet then come talk to the DRI group.

Reach for the sick bag.

Posted in irishblogs | Comments Off on Reach for the sick bag.

Here’s a prediction: If Yahoo and Microsoft are constantly watching Google they’re going to have such a narrow view that they’ll get sideswiped by something or someone else charging in from the peripherals..

Via Philipp Lenssen is a Kevin Forde piece about how silly Yahoo is getting about Google. Erecting statues which take swipes at GMail? Jeez. At the same time we have Scoble in chair throwing mood ranting about Google and disruption.

Disruption to me means causing chaos and upset for malicious reasons Disruption is coming into a room and setting off firecrackers. Google wouldn’t do that, they’d come in and give people more comfortable chairs, better lighting and maybe add some soothing mood music so that whatever people did in the room, they could do it better by being more comfortable.

I suppose calling it disruption is good. Disrupting a meeting, disrupting a cosy cartel. The whole idea of freedom fighters and terrorists. All depends who is doing the PR.

GMail disrupted the world of YahooMail and Hotmail? Nah uh. Google didn’t disrupt, they made a better and more appealing product. They made email simple again. They made it less stressful with a clean interface. They respected their customers and used all their abilities to give them something the customers appreciated. Just like they did for search and everything else.

Google didn’t disrupt a market, they showed the consumers in the market a better product. They removed thea status-quo, the old boys club, the monopoly or the duopoly. Look how much market share Hotmail and YahooMail had before GMail and now look at it. They both had years of experience before Google came about but they could care less about making improvements. They saw their customers as burdensome I bet. Now they call Google a disruptor.

Along came Google and the only “new” thing they did was give people mail that was easy to use and hassle free. CSS isn’t new. AJAX isn’t new. Searching isn’t new. How the hell can you class that as disruptive? Disruptive is not the opposite of lazy but that’s what Scoble seems to think. Notice how GMail is improving over time too? Some improvements are under the hood and some are little extra bits. New “fudgies” as we’d say in Cork. Look back at Hotmail and YahooMail. Their improvements seemed to be more spam and a decrease in account size. Oh and let us not forget that they demanded payment to make using their email system easier. So Yahoo 2 years later decides they are now going to give their customers a better mail application. Eh, a bit late. And then they reward themselves with a bitchy statue. Wow, you guys rock at doing nothing more than catching-up.

Google don’t do everything right though. Their blog search is shite. Their RSS reader is also shite but they’re both simple and easy to use and don’t appear to be laden down with crud inherited by all those conferences where clueless marketing people pipe in.

If disrupting the market is making products better and easier to use so that customers don’t stress and can get on with other things, then it doesn’t say much about the existing vendors in the market. Scoble mentioned that Office “disrupted” Borland and Wordperfect and so on. I guess that’s how Borland saw it anyway. Anyone noticed anything spectacularly different or better from Word 97 and Word 2002? I wonder if Google asked some of its people to improve it, what would they do?

Scoble talks about Yahoo and Microsoft getting it on to disrupt Google. But the only people who can disrupt Google are Google. If they become lazy and bloated and Microsoft and Yahoo make something better and streamlined that takes customers, then Google can call “Disruption”. Easier to claim you were disrupted than you were lazy.

But let me end this rant with something nice about Microsoft. One thing from that tripping and falling on your ass press event Microsoft had this week was the new version of MSN Messenger. That could very much kick the shit out of GoogleTalk if what they demo’d (badly) works and instead of stopping to erect a statue they added more innovations and kept on making it better and better and better. Think Microsoft can do that?