MJ mentions that Dave Winer is going to blogRetire. Dave Winer can be childish, petulant, mean, brash and loud. By god do we need more people like Dave but do we have them? Not only has Dave created blogging but he has also created Podcasting. The current new shift in trends is all thanks to him. He’s the guy who has also on numerous occassions said “Dude, that emperor is naked. ”

Dave’s not Gandhi but he was and is of the same attitude to get things done for the greater good. The right things. Dave knows when he’s right and will kick and scream and prod and push to bring everyone on side. Gandhi was blessed in that he had everyone onside when he did his work. Dave doesn’t because the opressors are not as obvious as they once were. They creep nicely in and we think they’re great and then bam, you’ve been fucked over. Evil is no longer zero sum.

How can you have the people behind you when the people don’t know what the hell is about to happen? Dave’s not been disheartened about this and in the past has thrown himself on many a grenade and decided to not give a fuck about popular opinion in order to stop the madness.

So Dave is going to retire and I hope he enjoys his retirement. He’s got plenty of battle scars and he deserves to take a break. Hope you have fun with your spare time fella. But who’ll replace him? A replacement is needed or more than one. Scoble, Searls, Weinberger are far too polite and we don’t need more polite people. We need people who are as tough as nails and will dive into a fight besides sitting around and discussing it. Who’s got the brains and the balls to get really angry about things and to not take the bullshit fed to and believed by others. Dave won’t take crap from Google, Apple, MS to name but a few. He’ll call out the new companies too who seem to ge so much love by the “A listers” who schmooze with them so much and are kept under the thumb via nominations to advisory boards.

Can the recruitment process for the next Dave start asap? We really need someone to fill the void.

The hunter becomes the hunted – Interview with a blogger

The BBC had a radio show called Chain Reaction. The idea was that someone from the entertainment world begins the series interviewing a person of their choice. The following week the interviewee becomes interviewer and choses their own person to interview. And so it goes on. The series wrapped up with Alan Moore interviewing Brian Eno. Would anyone like to do the same here for Irish bloggers? Since we all got on so well at the Blog Awards and chatted with people we previously only engaged with online and from meeting them in personlearned a good deal more, I’m sure now there are a load of new people we’d like to talk to and find out more about. To me it’d be a nice way of humanising this Blog O’Sphere too. I’d like to kick it off by nominating two people who would then go off and ask people to be interviewed. That way we should see about two new interviews every week or so. Are people interested in taking part in this?

Few rules:
Interview someone that you don’t know really well already otherwise it’s a bunch of mates telling each other how great they are.
Try and mix it up too by interviewing someone outside the sphere you normally blog in. Techs interviewing techs is going to be boring as are Republicans interviewing Republicans.
If you interview someone so they can just talk up their business then you will ruin the spirit of this and I’ll call you names on this blog. Maybe even rude names.
Be civil to the person you interview. Don’t interview someone just so you can get a load of digs in because you have totally different political views. I think Tom Cosgrave’s open letter to Richard is probing enough without being antagonistic.
Email the person first if you want to interview them besides saying on your blog that you want to because they should be under no pressure to accept.
Not a rule as such but a suggestion – Don’t lay out a set of questions and let it at that. Send a few follow-up emails to clarify some points or dig deeper into certain areas.

Update: 16 March 06
Greetings MSNBC Clicked readers. Thank you for stopping by. If you want to read more about Irish Blogs then try IrishBlogs.ie and PlanetOftheBlogs. We’ve got a great community going here and we appreciate your patronage. 🙂

Tues 7th. My birthday. Woke at 0530 to travel to Dublin for the launch of an Oireachtas report on broadband. Think I was featured in SiliconRepublic talking about broadband.

Wedn 8th.Talking in ENN about broadband and teleworking.

Thu 9th. On Dave Fanning to talk about Blog Awards.

Fri 10th. Flew to Dublin. Was in Irish Times talking Blogs. Was in SiliconRepublic talking about Govt Man project.

Sat 11th. On Newstalk talking about Govt report on broadband.

Tues 14th. Fighting with eircom director on Newstalk about broadband at 8am. Was mentioned in Electric News again.

In that time I also helped contribute to a few other news stories that I was not credited with but that’s the nature of the game. Am I a media whore now then? 🙂

Sweet: Amazon S3 gets all Bittorrenty

The cheap as chips Amazon storage service also has BitTorrent support. Back in October I suggested an Irish Bittorrent service and I was thinking about it again recently. With Amazon I wonder do we need it now. The price: $0.15 per GB of storage per month, and $0.20 for each GB of data transferred up or downstream. That’s very bloody cheap. Should be very very handy for podcasters like the lads from Letter to America

Posted in irishblogs | Comments Off on Sweet: Amazon S3 gets all Bittorrenty 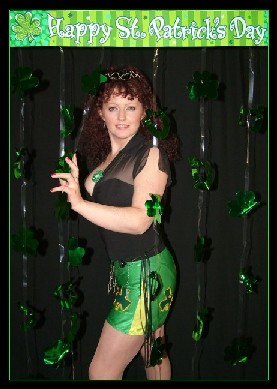 Not only did Aine make the Sunday Papers but she was also on the Dave Fanning show tonight my sources in Sligo tell me. I’ll put the direct link here when it gets uploaded to the 2fm website. How much money has Sligo Tourism spent on advertising their site? Spend it on Aine! She’d gotten 10s of 1000s to look at Sligo’s lovely sites without spending a fortune on marketing companies. The Internet was built to allow individuals to make a difference.

Aine has now put up a special Patrick’s Day 2006 message for all her viewers.

Is there any techy out there that can create a Google Maps mashup and add the locations she mentions on her site and when you click on them a video plays? Go Aine Go!

I was hoping to announce a few things at the blog Awards but was so busy gearing up for it that didn’t have time. So what’s next?

Myself and John Breslin are hoping to organise another Awards event for sometime this year but it won’t be about blogs. 🙂

I’m working with a few groups for a Technology conference in September. Think I already have a sponsor for it.

IrelandOffline are hoping to organise a conference this year and I hope to help John Timmons with this.

The very next item though is going to be the bloggers workshop. Myself and That Girl will work on this and it already looks like we have a venue sorted thanks to a nice training company. We just need to agree on what the formula is going to be. There’s a workshop wiki set up for it if you want to contribute.

Woah and double woah. Thanks to Joe Drumgoole we have the video of the 2006 Irish Blog Awards. It being on YouTube, doesn’t it mean I have to set my lawyers on them about 5 days after it being watched by half the Internet? 😉

Best blog comment so far about the Blog Awards

Attributed to Frank Neary on the United Irelander blog.

The guy from Rymus said ‘What’s Bob Dylan doing here?’ when he saw you.

Aine was in the papers today

Well done Aine. Following up from my first Sligo Tourism post is news that Aine was in the Star on Sunday today. Congrats Aine. Anyone got any scans of it?

EDIT: Francis has scanned in the paper here and here

People think I’m taking the piss out of Aine but I believe she’s doing a great thing for Sligo in her own personal style. We see the GAA ads about asking not what your county can do for you, but what you can do for your county. Aine does this. She’s a genuine fan of Sligo. Thousands of people now know where Sligo is and I bet some will end up visiting. How much does the Sligo Tourist board pay to advertise and market Sligo? Aine does it for free. I think she deserves recognition or even a helping hand. At least we should all link to her site so that she appears first in Google when you type in Sligo. Fuck Harvey Norman. Go Aine Go! I think the Letter to America kids feel the same way about her. BTW Jett and Wayne. You guys frickin rock.