It’s not always the PR companies…

Funny story. I once saw someone try to solicit a PR company by promising to slyly drop their product names into “conversations” on blogs, blog comments, twitter and some podcasts, in return for some free products or money. One would think that a PR company would all be for that kind of idea, getting their product details injected into conversations between thought leaders. Viral or whatever term they use now. A sneaky way of doing things. Natural conversations is where it’s at these days, right? The PR company told that person where to go instantly, citing their prefered use of traditional and transparent methods. There’s hope yet for these PR companies. Although there’s despair at some practioners in “new media”.

I meant to blog this ages ago. They Never Froze Walt Disney. In Cork. In January. See the trailer at the end of this too.

Dickheads of the year (2007) Irish Edition, who are yours?

Joel writes a nice piece on how to demo software.

LIFT looks like a good conference. Any Irish going to it? Or the venture evening?

Russel Davies has made a list of some very good conferences to attend. Conferences are the new music festivals, though without the terrible toilets and bug infested swamps camping grounds.

Seth from Meebo who we met during Paddy’s Valley talks about Venture Capital.

Animal lovers will no doubt write in en masse.

NES emulator for the iPhone. I might install it. On. my. iPhone.

Vista biggest crock of shit in 2007? Whudda thunk it.

Ribbit allows you to add voice/telephony to any webapp. Clever. What I like though are the demo videos they made to explain it. Much better than a blog post.

We all have bad memories of IPOs in Ireland, eircom’s one in particular. It’s looking likely that Facebook in the near future will go the IPO route. Facebook, not one for doing things the conventional way, even if the convention is about 3 years old could do something unexpected again. Imagine if they gave the members of Facebook options to be shareholders? They already listen to their people and even after all the hulabaloo over Beacon (which was more about a lameass “democrat” organisation finding a new target. MoveOn.org you’re tossers) and other issues, they amended things to keep people happy, they just caught Google out by checkmating them on OpenSocial and they have a few more clever things on the radar to make their users happy and make money from it.

It almost makes sense they’ll do what Google did and have a dutch style IPO but also offer cheaper shares to their users or give them options to buy.

What would that do to their stock though? Would 50Million shareholders mean that their whims, if tweaked, could see the stock go up and down like a yoyo or would it mean they just ensured 50M people are devoted to making the site work and recruiting everyone else? Would the stock would remain very stable as each shareholder feels they have a connection to each other and the Facebook board? What about the traditional institutional investors?

Whatever whichway, I bet the Facebook IPO will be fun.

The categories for the 2008 Irish Blog Awards are below. I’m looking for sponsors again, previous sponsors pay the same price as last year whereas new sponsors pay a little more. Prices to be finalised in the next few days. While last year the goody bags were secret (and were near empty as a result), this year I’m seeking goods to put into the goody bags. If you work for a company or know of a company that wants to put some of their merchandise in the bags for free, give me a shout. Leaflets are a no. Ideally we’ll need about 400 items per company. Nominations will start fairly soon too so be ready. This year the process is going to be different as you’ll see. Keep a look out!

So people are now slow to trust Governments with their data? Took some time didn’t it?

A great summary of what Vendor Relationship Management is.

Via Kottke, love it:

Trying stuff is cheaper than deciding whether to try it.

Via RFJ Track all your packages in one go with Track the Pack.

Dickheads of the year. Irish version to follow? Twenty, ya want to make one?

There’s a competitor to Redbull in America for the girlie market and some sales proceeds goes to a breast cancer charity. It’s called Go Girl. That’s me modeling for them.

I bet she nagged him into it.

People of Ireland, you have til Thursday to buy the Tom Waits song “Christmas card from a hooker in Minneapolis” and try and get it in the charts or close to number 1. G’wan, it’ll beat the usual shite. Buying details here from Adam. Summary:

Bock has at it with the Brothers of Charity Inquiry. Bock is like Geraldo and Prime Time mixed together with gin. Seriously though, Bock is impressing me more and more each week. Well done dude. If this fucker gets a book deal before me though there’ll be war… 🙂

John Gormley did not mention me today. Crysies (Una you rock). I wonder though could he answer a comment somebody here made about the carbon footprint he’s left as a result of all the jetting to Bali. Someone suggested teleconferencing in to the meeting instead. Not sure is teleconferencing ready to be as good as real-life ear bending though. And by the way, still not a fan of the new Green party but fair play for the Minister for the Environment blogging, as in REAL blogging. Dialup Dempsey blogged during the election and stopped but full praise for Sandal John for the blogging.

Via the Chancer, the RTE News Bebo page.

Speaking of Christ, I got the 2007 edition of this.

Via Lar: The Paradox of choice:

Suzy has a Michael Lynn scoop. Is he off to Brazil?

Red Mum has a long rant about the life of someone that rents in Dublin. Politicians should read that.

Go to Sabrina’s site or else.

Bosco is back. Oh bollox. Annoy your friends this Christmas.

Teachers are getting Bebo bullying training. Perhaps getting them to use a computer is a first step. Step zero is the state providing a computer to them. Wouldn’t that be nice?

I tore up 40 euros worth of One 4 All vouchers the other day as they were out of date. Gits. Seems Conor found a loophole.

This is sad. Using a pic of a blackberry convo for a scoop.

Remember my friends from that baggage handling company? 🙂 Thanks to Paul. 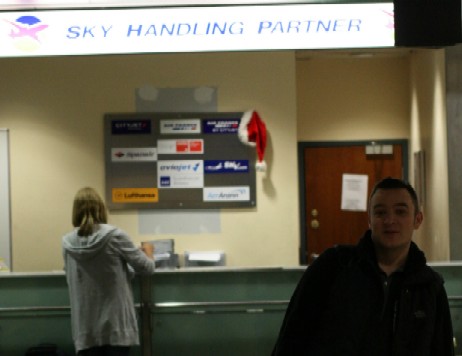 Another Paddy’s Valley post – Alexia, Anton, Shane and Havi blog about it

Alexia has blogged some takeaways from the trip. Nice summary of Valley philosophy. Forget some business book, print off her points and stick it on your mirror so you see it every time you’re feeling vain.

Anton doesn’t want the momentum to dwindle. Come along on January 20th 24th to meet us all.

Shane blogs about the Paddy’s Valley adventure too.

And now for a super bonus, we got mentioned on the Yahoo! Next blog by Havi.

If there is a next time for Paddy’s Valley I want us all to meet the the Governator. Aim high, it works over there.