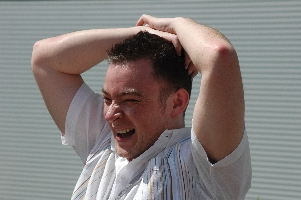 Taken at the company BBQ this week. Grrr.

Posted in Uncategorized | Comments Off on Unflattering pic

Wired Discovers GTD. Took them long enough. I’m sure this will get bigger for a while and then the fad will end and someone will find a carb-free version to distract themselves with.

Speaking of GTD, here comes Next Action and online GTD program to keep you chugging along and being efficient and productive.

The Firewall is Dead. Are the days of restrictive firewalls dead, to be replaced with tougher DMZs? I think firewalls will be used along with other things. Eventually I guess everything will go through packet analyers once they become easier and cheaper to use.

From security to blackhat SEO tricks.
How to use the DMCA to have websites blacklisted by Yahoo! Dangerous this is that DMCA and such a stupid law that it allows a lot of abuse.

Whitehouse gets a battering over Rove. Funny how the press let this all but drop running up to the election. Now that silly season is upon us we get to read about this. Still shows the press has a long way to go to restore the trust that they lost from some of the people.

The Logic of Suicide bombing. It does need discussion I guess.

Fireants into genetic engineering. Males and females wage war and remove the DNA of the other sex to ensure their own sex is born/harvested. I think I read that this weekend when I was reading the book “Emergence”.

RSS Clustering. *Shrug* RSS and Usability I guess. Will look at it later. Simpy’d it for now.

Posted in Uncategorized | Comments Off on Mixed bag: Death of the firewall, Wired finds GTD, DMCA being abused again…

Hungarian woman living in London went to a public webcam in Covent Garden and used her cell phone to record her observations and feelings. A colleague videotaped a monitor displaying the webcam footage and an Hungarian news channel, NNTV.hu picked it up.

More citizen journalism being used. Sounds like a fun idea where you use a public webcam to do a webcast of sorts.

Posted in Uncategorized | Comments Off on Videocasting with public webcams

Ten Tips for New Trainers/Teachers and Eleven things to know.

Some great advice. Something that musn’t be forgotten about anyone in any job or even who just blog information is that we are all teachers in a way. We are all sharing information in various ways and hoping people will use it.

Back from London, a city that won’t be beaten

Back from London after going there to see Sigur Ros in Somerset House. Fantastic gig. Some Sigur Ros gig pics here. I’m tempted to go see them in Boston in Sept after that show.

I noticed too that Kottke seems to be a fan of theirs.

But back to the people of London. They won’t let something like the latest terrorist attack stop them from being and from getting on with life. While there was heightened security and a greater sense of worry about security I don’t think it will make people change their lives and live in fear. I noticed newsreports saying that the underground was really quiet on Friday with carriages that were generally full all quiet now. Well duh! Most companies gave their employees the day off and told them stay home and stay safe. It’s the usual TV hype and bullshit.

The rise of citizenship journalism during this event was fantastic and I think will make news more honest. The main stations used to have the ability to twist the facts and get away with it, but not anymore. Flick and blogs and cameraphone pics save all these moments in time forever.

Posted in Uncategorized | Comments Off on Back from London, a city that won’t be beaten

Just to get me weird visits from Google

The Glory Hole. A very famous glory hole, created decades ago and still used to this day.

And now that I have your attention… The fourth annual ArtBots: The Robot Talent Show, an international art exhibition for robotic art and art-making robots, will take place at Saints Michael and John Church in Dublin, Ireland on July 15-17, 2005. The show is free and open to the public from noon-6pm each day.

I can’t go, can someone get me a t-shirt?

Integrating Bloglines and del.icio.us. A very very cool Greasemonkey hack that adds “Post to del.icio.us” to every entry in Bloglines. This was my first use of Greasemonkey and damn I think I’m already hooked. This just made my life so so much better.

Posted in Uncategorized | Comments Off on Bloglines and Del.icio.us greasemonkeyed

Paul Clerkin gives his side or rather the actual facts about when the Irish Examiner acted the bollox and sensationalised a non-existant story. I know this is silly season but post something about funny shaped vegetables if that’s the case. Gutterpressing and twisting facts is not called for. To run the story is one thing but then to create a follow-up piece adding more mistruths is something else.

In total, of all the comments made apparently by users criticising the elderly, about 2 stand – one of which is definitely out of order, the other is a very general observation about objecting if a church was planned. The remaining quotes would seem to be either falsified, misrepresented and/or misquoted.

In a subsequent piece on Friday, 8 July, the Examiner ran a headline “Website pulls section over anti-elderly comments”. I have not pulled it, it like so many threads before it, has simply dropped off the front page.

Good fucking christ, can they teach them how to use a website before they mouth off about it?

Certainly a lesson to be learned here for those operating websites and blogs and the liberties journalists can take when reporting “facts”. Shame that the Examiner is stooping to this level. I wonder will an apology be published over this? perhaps with enough pressure?

Be handy for those in the irishblogs to point to this story and comment on it to keep people focused on it. Nobody can allow this kind of shite to happen again and again. How long before there’s an Irish Blogs union and an Irish Blogger’s Defense Fund?

Via WorldChanging comes the idea of the hundred mile diet. You only eat produce grown/raised/caught from up to 100 miles away.

For one year we would only buy food and drink for home consumption that was produced within 100 miles of our home, a circle that takes in all the fertile Fraser Valley, the southern Gulf Islands and some of Vancouver Island, and the ocean between these zones. This terrain well served the European settlers of a hundred years ago, and the First Nations population for thousands of years before.

It seems this is really hard to do these days.

With all this globalisation happening and us getting our beans from asia and our spuds from South America and our milk from Africa, what would happen if for some reason we were cut off from the rest of the world, for whatever reason? If our island was quarantined in the morning how equipped would we be to sustain our current way of life?

Posted in Uncategorized | Comments Off on The Hundred Mile Diet