Fuck Brochures, have a comic

Instead of doing a traditional brochure for the dayjob I decided to have a bit of fun, at my expense mostly and commissioned Tommie Kelly to make a comic for Mulley Communications. The result is pretty damned good. (Biased) I posted it out to a few people and yesterday there were a good number of tweets about it giving good feedback. I fired some ideas to Tommie, he took them and created the comic. It was a quick and painless process. He’s taking commissions too if you want him to do something as fun for your company. 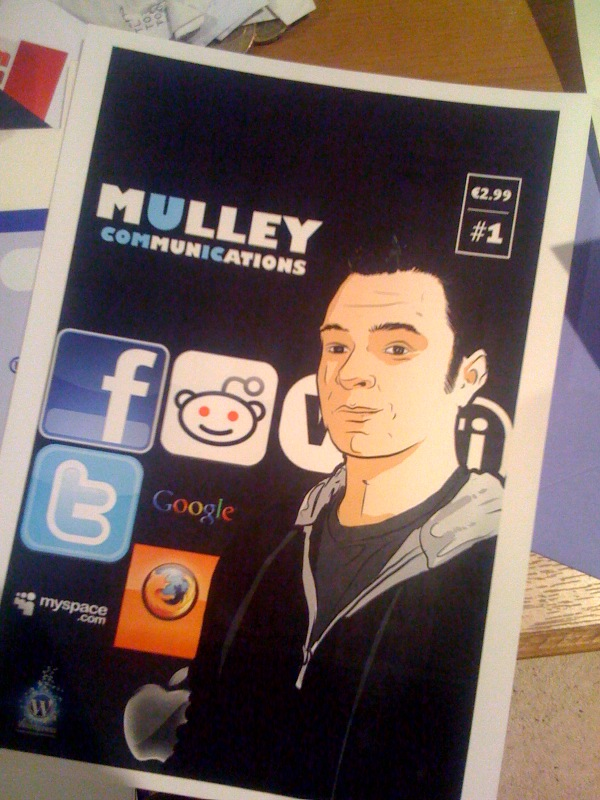 It gets in my penchant for trains, use of colourful language and that red shirt that so many dislike. Me as Willy Wonka was his idea, really. The cover image comes from this photo by Phil. What I like is that in the digital world where I do most of my business it is very rewarding to create something physical as well that will age, fade, tear, stain and crumple.

The full comic is below but the print version is better. I may have a few left and maybe volume 2 is on the way. 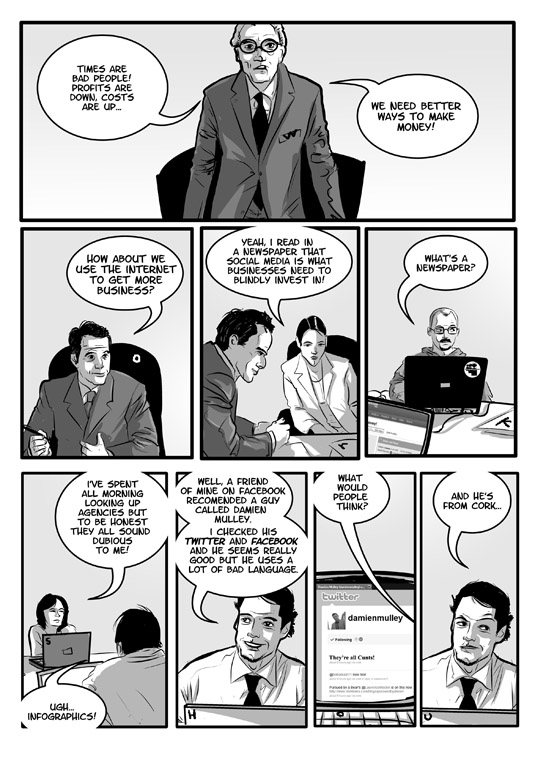 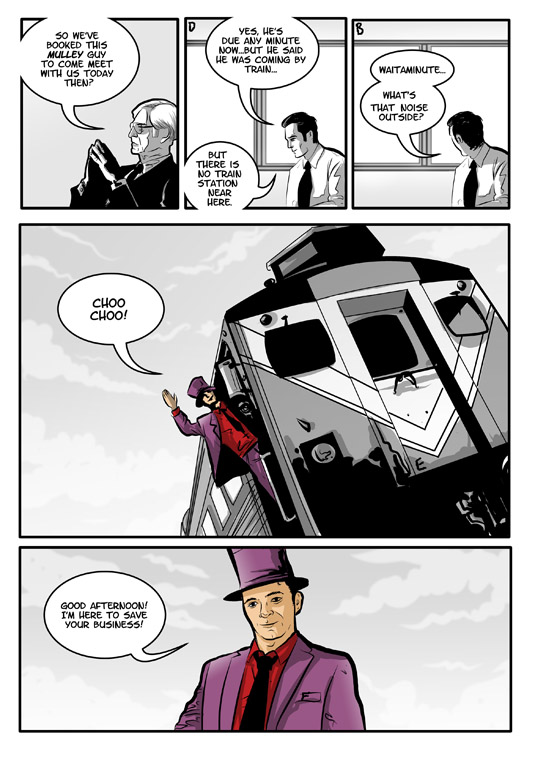 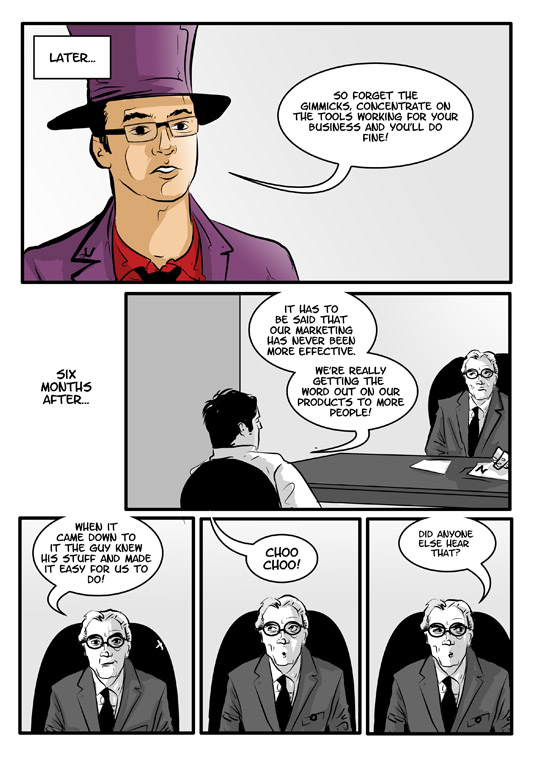 Both the IIA/Irish Times/Prosperity and the Digital Marketing Institute have been press releasing and posting about their FETAC Diplomas. As well as emailing me asking to blog them.

After checking with FETAC it turns out these Diplomas are not FETAC approved just some component of them. Anyone that knows FETAC know how strict they are on this use of their logo and name to sell courses like these.

This was their site earlier:

Since changed to this, though note the website address:

Press releases sent out though with this line too, which some outlets picked up without checking. All news to FETAC.

Update: This was the DMI take on FETAC a week or so ago

But perhaps this would be a bit disingenuous, don’t you think?

and from their press release:

Diploma in Digital Marketing to launch in September

An exciting new Diploma in Digital Marketing with FETAC accreditation (level
5 minor award) is about to launch in September.

So yes, keep your eyes open for organisations claiming to do diplomas with FETAC accreditation. I worked with some orgs that worked with FETAC for training courses and they worked their backsides off to get accreditation. Very disappointing then to have this kind of thing happen. I’ve been asked numerous times about my views on these courses too so might as well put it down here: Some of the lecturers on them are very good. Right now there doesn’t appear to be better alternatives out there. And there’s your business opportunity right there.

A physical sticker for a digital interaction – Like us

Getting stickers printed for some clients/friends and decided that I might as well open it up to other companies in Ireland.

Some thoughts on The Times and their paywall as relayed to a journalist recently, though in a slightly expanded and modified form.

Isn’t it sad that it’s 2010 and only now are papers doing something in this always-on multimedia world to up their game? Now we are told we’ll get some quality content after all the years of decline in quality and readership. Something is needed to bring back quality, maybe it’ll be the idea of paywalls that will bring it back and then maybe a different model to retain quality will happen. This recent presentation from Hal Varian from Google actually shows newspaper revenues have been under attack since the 50s.

Google has never been a threat. Terrible content has been. Looking at the media these days, you can’t tell which news site you’re on as every story is the same. Far too many pieces are just copied and pasted from press releases, especially the breaking news sections of sites.

It’s been a race to the bottom for years with newspapers cutting back on journalists and editors, relying too much on using news feeds that all other papers use and taking less and less risks to break stories. No longer have newspapers been setting the news agenda but covering it with a slight timeshift.

Paywalls won’t work if you are hiding the bland content that is also on so many other websites out there. The internet has been designed to route around “damage” or blockages so if you are blocking your content that’s based on a press release, it will be available elsewhere.

Initial reports from the Times are that there are “value adds” behind the paywall. More images, more insight, access to journalists etc. This is value and it is unique and I think people will pay for that.

Instead of charging for this content, other alternatives would be to sell historic data, to give free access to the main site but analysis type reports which can be used to enrich a company would be sold. Imagine having the Irish Times create a report on the state of technology in Ireland and opinions from their most experienced journalists on what are areas to punt on? Charge a few hundred euros for the report. Same for all the other industries they cover and tie it in with pass historical records from their archives.

There’s also way more money to be made from advertising if they made it more targeted and more automated. Instead of charging for banner impressions which makes both sides lazy, they should be working with advertisers on a cost per conversion model. Get direct custom from a newspaper site, pay more.

There are also sorts of additional streams too like business conferences, sport events with their pundits and the sports stars they know. Bands make less from album sales and more from touring these days apparently, a working business model, why not the same for newspapers? Too much hard work. I watched a documentary about UK dockers and in particular the Liverpool ones who resisted the cargo boxes for years and the shipping world passed them by. The print model worked for a while but it’s very odd that it really has not changed in decades despite all the warning signs being there.

I notice that the Irish Business Against Litter have an interesting logo:

Here’s SuperGorm getting his Goatse on.

Worst recession ever. Banks not lending money. Ireland is all sorts of fucked. Nobody is spending a penny. Stealth redundancies en masse. House prices are plummeting.

Office space is dirt cheap.
Every price can be negotiated.
Deals are much easier to do if you are someone with cash.
There are oceans of talented graduates looking for work and who’ll work damned hard to retain their position.
Colleges are throwing interns at companies.
People have more free time (unfortunately for some) to beta test your products or services.
The media want good news stories.

Some great companies started in a recession, Google wasn’t one.

Public events where I’ll be in the next wee while:

Still some spaces for the Branding and Communications workshop on Thursday 22nd with it@Cork. Free for members.

Also a few spaces have opened up for the Online PR Course in Dublin on May 4th.

Measure It! meanwhile is on May 5th in Dublin. Two hour event from 10-12 in the Odeon. For PR people, marketing people and those in digital who want to share practical solutions on issues they are having with social media.

Media2020 is booked out. My 5 min talk on gadgets might have me show off my iPad. Using Keynote for iPad to design the preso.

Posted in business, Events | Comments Off on Events event events