One of the Gay Guys in Westlife Comes Out – and nothing

It really is silly season when the Sun has this as their main news story. The main surprise surely is that some people were surprised. He’s young, loaded and classed as good-looking, that he didn’t have some cute and clever young girl riding him to the altar is a big hint that he’s gay. Though I’m sure there are exceptions. Sir Cliff Richard for example. He was in a way in the first generation of boybands and 40-50 years later he’s still a bachelor boy. And he’ll be a bachelor boy til his dying gay, er, I mean day.

Google decided to sell a few shares to give themselves a nice pile of cash to play with and possibly acquire something or spend on a big project. They sold 14,159,265 shares. This number is important in a way. These numbers are the first numbers after the 3 in 3.14159265. Pi. Larry and Sergei, such jokers. One rumour is Google will build a national WiFi Network with their pi money. With the FCC giving the telecom goliaths anything they want to make more money a free WiFi network would be really interesting.

How odd. It seems that if you do a Google search for Columbia 3, it is my sarcastic blog entry on the Columbia 3 that appears first in Google. Maybe it’s just a temporay thing until Google finishes her regular dance.

Now would be the perfect time for selling T-Shirts and novelty pens.

EDIT: Just realised why. DOH. Colombia is the country, not columbia.

that girl is musing about the Sigla piece by Sinéad wondering why there has hardly been any discussion about the Abortion issue which recently resurfaced and especially why women have not posted about it.

I too thought there was little coverage. I mean, it seemed talk of wine got more coverage.

To verify the lack of coverage I did a search of Planet of the Blogs and found the following recent posts on Abortion:

Thaed is pro-abortion and she makes some very heartfelt comments. Her whole post on it needs to be read. I’ll just quote a small piece.

So we ignore the big taboo.
Women dont tell thier stories.
They dont share why they full of relief, guilt,sadness and happiness twice a year,
usually the date of thier termination and that date the child would hve been born.

Colm Bracken takes Ivana Bacik to task, and talks less about whether abortion is right or wrong.

Bacik has done the opposite. She has sought the deny the unborn their rights, not by asking the Irish public their opinion, but via the European Court of Human Rights route.

Slugger mentions the abortion story, but doesn’t give an opinion. Some good comments below the story, one from Daisy:

The Dossing Times calls the abortion debate the new A-Bomb. He doesn’t seem to give a view on abortion itself but rather what may happen as a result of a ruling:

I think this is going to be a big case not only for Ireland but for Europe as well if not the world. If they win will people say it is a human right to have an abortion. If they lose will it define the foetus as human and subject to the same rights such as life and freedom of expression. Could this be the European Rowe vs Wade.?

William Sjostrom is the Atlantic Blog too takes a shot at Bacik.

Bacik was least seen getting indignant about removing Saddam from power. Dead Iraqis, dead babies. Who else is she keen to see get killed?

Mark loses it with both sides and thinks they are both more interested in the fight than a solution.

PS on Balrog’s opinion on abortion is clear, though blunt.

To me, abortion is the murder of an innocent child and can NEVER be justified in any way shape or form. The IFPA make the point that every year thousands of Irish women make the journey across the water to abort their children. To me this misses the issue. If only one child is saved because the woman in question did not want to travel then the legislation is worth having in place.

Now going back to that girl:

Men unconsciously know that women have the power to annihilate them. We can kill them if the pro-choice movement gets its way. The control of women’s fertility and sexuality has always been about the unconscious fear carried by men that women are, in fact, more powerful in the life stakes. I believe that the prominence of men in the anti-choice movement is an attempt to save the perceived annihilation of the male species.

Bacik should be at least be applauded because she and the IFPA are prepared to address the huge numbers of women travelling across the water each year for terminations. Even if many, or perhaps most, of this country deems itself anti-abortion, it’s time to take collective heads out of the sand when it comes to the fate of over 6,000 women every year.

Both Sinéad and that girl have made a very valid point though. For such a big issue there hardly is any coverage and less again from the lady bloggers. Perhaps Caoimhe could research this when she does her PhD?

As for why I didn’t comment? Generally I do stay under the radar on political stuff like this but I did contribute to an abortion debate on GayCork which proved to be quite hot-headed and I was quite fatigued from writing about it anywhere else.

UPDATE: 19 August, 2005: Wind and Breezes gives her opinion. though in answer to why Bloggers did not blog about this.

I guess what I’m trying to say is that it’s up to every blogwriter to decide what appears on their blog and is up to no blogwriter to be surprised by presence or absence of subjects.

Posted in Uncategorized | Comments Off on Why did Irish Bloggers not talk about Abortion?

With the new Word interface for Blogger there is no need for the browser is there? Control goes back to the Operating System and Microsoft Office. The main money spinner for Redmond.

MS really does want to get into RSS and Blogs. Vista is meant to have RSS support. How much we don’t know. Blogger then is one of the biggest spaces around. I’m sure it would be a good trial for MS to see how this goes and then offer the service to typepad and all the rest. Shouldn’t there be a toolbar for MSN Spaces too?

It is interesting that Google and MS worked together on this with MS wanting to tackle Google and Google apparently wanting to move more of the operating system on to their servers and away from MS. I guess they’ve not become enemies yet. Oooh, I wonder what the conspiracy nuts would think if they worked far more closely together?

Posted in Uncategorized | Comments Off on Word to Blogger – How important is this?

Via Rashomon comes this picture from Joseph Szabo

Dinosaur Jr. used it for an album cover. It is quite unsettling to see what is just a kid trying to carry the attitude of an adult.
More Joseph Szabo photos

Posted in Uncategorized | Comments Off on Joseph Szabo

Using Google Maps to track visitors to your blog

Map of visitors to Mulley.net

Thanks to a neat script from GVisit I can see the locations where people visited from. Trouble is I think it misses a lot of my visitors. According to the map only half a dozen people visited in the past 12 hours. generally I have about 10+ per hour visiting.

Anyone can look good in Black and White 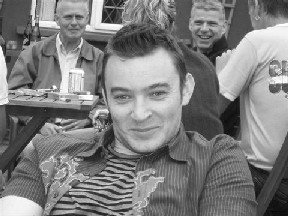 The World Wide Adventures of HeldenCrow

HeldenCrow – The journal of an Irish barrister who nipped out of the Dublin law library on a coffee break one afternoon and never went back.

Blogging since 2001! Been reading some of the posts are they are really good. Someone give him a book deal. There is a distinct lack of Irish writers around… *ahem*

Got this via MetaFilter.

Is my child becoming a homosexual?

From the Focus on the Family nuts, you can’t make this stuff up:

Is my child becoming a homosexual?

Posted in Uncategorized | Comments Off on Is my child becoming a homosexual?