Rob mentioned recently the dodgy ads he was getting in Facebook. So with their new highly targeted ad system, here’s the type of ads I’m getting on Facebook. 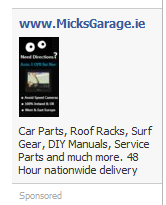 This seems just to be targeted to Ireland

Same with this, nowhere did I say I was into guys. Targeted to all males in Ireland? 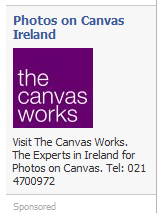 Seems like this is targeted just to Cork? Though they have a Dublin office too.

Targeted to all of Ireland?

The 2008 Blog Awards will be in February, not in the usual month of March. As a result planning for it is starting earlier this year for it. I’ve been getting feedback all through the year so I’lll be removing some categories and I’ll be adding others. If you want to suggest a category please do but do remember I’m looking for a category/niche where there are least 20 blogs covering that area. Otherwise I’m not sure it is worth creating a category but perhaps the next year there might be numbers for Blog Awards 4.

These are the existing categories for the Blog Awards:

Science Week Ireland blogging competition Day 2 – â€œWhat invention do you want to see most in the future?â€

Another day, another Wii. Yesterday saw a load of entries and they’re all worth reading. Some of them are dripping with nostalgia and brought back a lot of old memories.

Today the question posed is â€œWhat invention do you want to see most in the future?”.

Already out of the blocks early this morning is Roosta with Giant Fighting Robots.

Brian wants a big bloody feat of technology engineering, not something namby-pamby. Right on!

Johnny K says he wants a product that will guarantee healthy teeth and gums.

And since people keep asking me, not the Science Week people, prizes are awarded next week after all the postings.