Be your own hero

Some thoughts as 2008 gently comes to a close. This is the sister post to And?

Why look up at sports gods, business giants or famous entertainers? Be your own hero. Expect excellence from yourself. Expect a high standard. What you expect of those giants, expect of yourself. Line yourself up for challenges and work really damned hard to make sure you carry them out and you won’t be disappointed even if you don’t manage to complete them. Why should a stranger get your adulation when you yoruself should get it? Love yourself. (Not in the making-you-go-blind-way) I see so many people reading business books and biographies of business people and hear them recounting to everyone how these business people are brilliant and worthy of praise. They are but feck that. Why not do and create and build and compete with them? It’s not a monopoly that they hold.

Be your own hero in 2009, you all deserve some adulation. You might be my hero for being your own hero. (Begin infinite loop)

And then there’s this:

Maybe they should be called YellowSnow.ie?

Director of communications company tells me about C U Next Tuesday on Twitter and how that bad word is in my Twitter profile url and it’s obscene. I act shocked and confused. What ever does she mean? The penny eventually drops and old-skool type deleting of the mess happens (Aside: Oh yes and after finding out Rupert Murdoch owns Facebook, she deleted her profile): 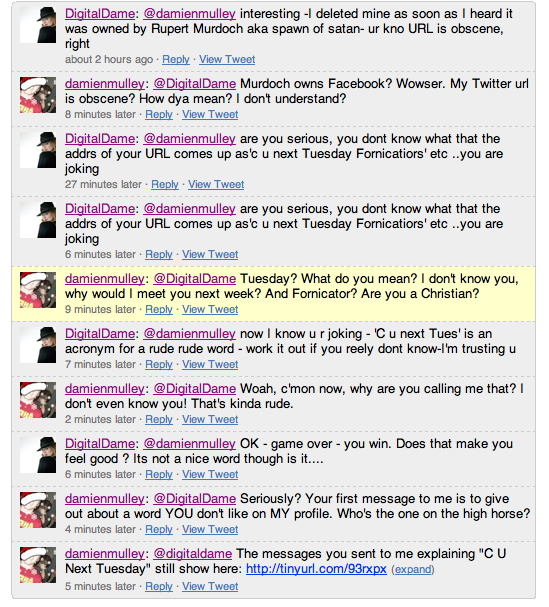 Director of Yellowstone.ie telling Damien what C U Next Tuesday really means

So after that, she deletes all those messages to me as if it didn’t happen. Liam makes a comment and she thanks him for his support:

Liam is thanked for his support

He says he didn’t support her. She deletes that message but they still show up in the Twitter timeline.

So the nuclear option is taken, the whole Twitter account is wiped. I’ll leave it to Liam for his take:

There’s a case study in this on how NOT to engage with an online community. I dunno what rule number it is but Rule No. Yellow is: Don’t join an online community and tell them how they should behave on their space especially if done in your language not theirs. Understanding a community takes time, you need immersion. If someone has Cuntfuckistan as their URL then there’s a strong chance it was put their on purpose. It’s not like I bent down to tie my lace and someone changed my profile URL.