Engulfed in quotes from business people

I think you should write the rules, if you follow things in a formulaic manner you will wind up at best being the same as everyone else

Tim Cook – Inspirational Nuggets. Collaboration and lack of ego seems to be massively important to Apple.

Find me a provocative topic, and I’ll show you something you don’t have to spend a lot of marketing dollars to launch. People like to be provoked, and if you are provoking with information that is on the side of the angels, on the side of the consumer, the louder the industry reacts. And they just can’t win. It’s the greatest way to market, pick a fight with somebody who can’t win.

23 Laws of Creativity from David Hieatt.

Posted in business, irishblogs | Comments Off on Engulfed in quotes from business people

Came across an iPhone app (US Store only) for Doctors to share (with consent) patient ailment pics called Figure 1.

Take a pic, share it, get feedback. You find some very gorey things, like brains at an autopsy, severed fingers etc. Or this one: 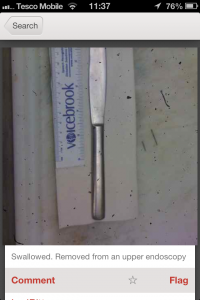 Or when Doctors share the shoddy work of other Doctors, you may get worried: 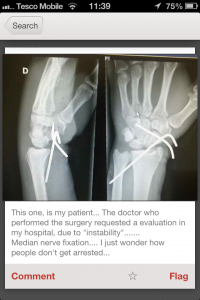 We need to send our sons and daughters away. All the bleating from Enterprise Ireland and the IDA showing off hipsters in startups in Ireland (that they rarely gave a shit about until it became a marketing hook) is great but where the big time is, is not here. We’re Ireland. We’re not Silicon Valley, we have more landmass than Israel but nothing else compares. Hipster startup kids, you’re just marketing collateral for Enterprise Ireland and the IDA to bring in tax avoidance money and a smattering of jobs. I worry for Pat Phelan as he drives himself to the edge of the burnout cliff and then stamps the dirt down on that edge but Trustev is hitting all the right spots and you’ll notice while it was thought of, formulated and molded in Ireland, to succeed Pat and Chris need to be on planes going out of the country for meetings. It can be anchored here but there isn’t going to be many walk-in customers for Trustev. And that’s where they’re going and that’s why they’re hitting it out of the park every day with awards, media attention and nonstop calls. Well done them.

There isn’t the established wealth and there isn’t the inbound wealth in Ireland to lavish patience on startups. You’ll probably learn more in one day in the startup scene in London, New York and Berlin than in Ireland in six months. Whether a conscious decision or a reactive necessity, Wayra in supporting Pat and Trustev, has helped them to be what appears to be “everywhere, every week”. Wayra is handy in that they have incubation centres in many countries so they have people on site in places you need (and not just ought) to be. A network of global incubation centres, great idea.

For me, in the busy season, I see my house at weekends and when people ask me is all the (internal) travel tiring, I tell them of course it is but I go where the money is. One of the suggestions from the Farmleigh love-ins a few years ago was to take some of the best business graduates and send them into the middle management of various countries in Europe, Africa, Asia. It seems the Government worried about the “optics” of a brain drain. That worked…

Apocrypha about the Collisons unable to set up a company in Ireland or even Father Ted being rejected by RTÉ probably aid in the lie that you could be big in Ireland “if it wasn’t for”, in truth you’ll fail faster and better and succeed in places with more resources and experience. London is better for comedy and TV than Dublin, Silicon Valley is going to be better to work on a startup. How much would it cost to be a mini-model of Silicon Valley in Ireland? Billions? And you’ll still be going to the Valley monthly anyway.

Irish people have a huge sense of longing and want to be back to where they came from. They’ll also help out their brothers and sisters at “home” when they can. Hubspot and the Irish roots connection. EMC. Again, they might be good PR bits but Cork got EMC because of a Cork connection. Ireland would benefit immensely if more Irish people were in companies outside of Ireland, corporate tax dodges or not. English speaking well educated workforce yada yada, yet it’s foreign language jobs the multinationals hire here for more …

Want to start a startup in Ireland, have no ties like kids and a mortgage? Leave and fuck those that guilt trip you with “I decided to stay and fight here”, I’m staying because I’m comfortable and lazy, actually.

Anyway, this started as a link to Trustev winning another award and congratulating them. Ooops.

“Through the use of language, I was writing God into existence … the actualising of God through the medium of the lovesong remains my prime motivation as an artist.” Nick Cave on the art of writing the love song. 45+ minutes of miserable beauty.

Terrifying. You don’t say yes to the NSA and:

And then the DoJ targeted him and prosecuted him and put him in prison for insider trading — on the theory that he knew of anticipated income from secret programs that QWest was planning for the government, while the public didn’t because it was classified and he couldn’t legally tell them, and then he bought or sold QWest stock knowing those things.

A cricket orchestra. Really. Lars Fredriksson looks after all sorts of Chinese crickets and then builds an orchestra around them. The chirps from them change depending on the instrument that plays with them. Found via Lyric FM.

Evening course in Chinese with a module on doing business, in UCC from September. Awfully designed website alert (I can’t even link directly to the course page)

The worst charities in America. Works exactly the same here. For-profit companies collecting for charities is lazy, indulgent and idiotic. But then look at all the Irish “charities” with CEOs on well over 120k a year. Charity in definition only.

The latest not so very subtle message from Apple is that they deeply understand design and are a Californian design company. An expensively produced ad on how Apple helps people to change the world is brilliant too:

What’s behind the Facebook sound? Notes with F A C and E.

Panti in the Abbey. Great to see her show pop up there.

The original Sesame Street cast and the first episode.

Search data tells you if a movie will be a hit or not before the first opening weekend. Thanks Google.

The rise of the hardware startup.

The out of control surveillance state.

The Tony Awards 2013 opening is all kinds of awesome.

Free Will and Testament

The bit that interested me was them not saying what they do here:

Manwin refused to comment in detail on what it does here or to discuss whether it had located here in part for tax purposes.

“Manwin is a private company and accordingly, matters pertaining to its operations are treated in the same manner,” the spokesperson said.

If you did some LinkedIn searches however, you’d find a number of people who work for Manwin.

This is their CEO for Ireland.

Which is the same registered address as Manwin Ireland. 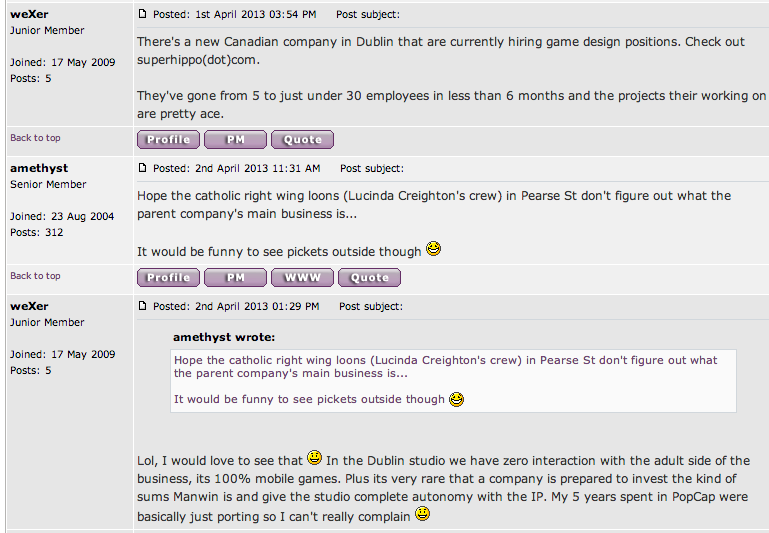 Anyway, Super Hippo (who we now know is owned by Manwin) tweeted about some of their games.

One is a Trivia game. On iTunes the publisher is registered as another company, yet again – Mirmay Limited. 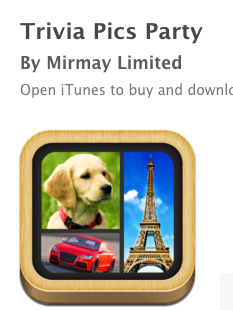 and a lookup of them on Duedil tell us…

Same address for the Manwin companies and Super Hippo, this is just a firm that does all of these registrations but, still, all using the same company to reg.

And some of their other “apps” include this one that hints at it being used to download video content from “tubes” sites and to hide away the content then: “The app allows you to easily download media from free tubes and other media sites to your iPhone, iPad or iPod touch. ”

And so a further twist, another of the games made by Mirmay/Super Hippo/Manwin is called Video Bash.

The app and website mentions Clayden Holding Ltd, owned by the owner of Manwin, though they say registered in Cyprus but a record I found said that company was dissolved in Cyprus. Here is the Canadian listing.

And finally, a gambling game made by them, Golden Slots Casino.

Coming to the Opera House – Singing Nina, The Life and Music of Nina Simone, performed in narration/sung by Karen Underwood on May 31st.

The West Cork Garden Trail is on 15th to 30th June 2013. Nice pretty gardens open to the public.

Courses from Mulley Comms:
PR Workshop – Getting your business into the media.
Responsive Web Design.

Greenshoots 2013 Awards & Showcase are on May 30th 2013. This ceremony marks the end of the third Greenshoots Programme and you’ll see how companies have progressed after the 9 month programme.

Reach for the Dead

Posted in Fluffy, irishblogs | Comments Off on Fluffy Links – Friday May 24th 2013

Visually, connect it to Google Analytics for nice data graphics.

While this back and forth between Steve Jobs and James Murdoch shows Steve didn’t take shit, it actually shows what Amazon is up to with e-books and how they’re losing money. For now.

Bank of Ireland now doing free spaces in Dublin for business people. Do I need to be a business customer?

Hollywood already has script doctors. Now they go through data on movies too. Data science y’all.

Watched a documentary on Leigh Bowery. Fascinating guy. Some performance artist. I want his glasses.

@BreakingNews and how they operate. “With us it’s interesting — there’s pressure to be second”

Marc Almond – What Makes A Man

Posted in Fluffy, irishblogs | Comments Off on Fluffy Links – Wednesday 22nd May 2013

Remember that idea of a foldable plug? Get it here.

The next iteration of Seán Bonner’s Safecast cheaper Geiger counter is to make it portable. Dronized Safecast.

Habitual by AJ. A simple personal analytics app. Android based.

Facebook Wifi, love the idea, they need to bring it to Ireland. “Will check-in for WiFi”.

An information session will be held at Western Gateway Building, UCC on 5 June for those interested in entering the Seedcorn Business Competition. Big wad of cash for overall and area winners.

Panti mentioned Leigh Bowery in this video about how she started in drag. The full documentary about Leigh Bowery is available in six parts on YouTube. It starts here. I think I’ll get myself a pair of his glasses.

Posted in Fluffy, irishblogs | Comments Off on Fluffy Links – Wednesday May 8th 2013

Steal this objective from Netflix, it applies to all businesses:

Our North Star is to win more of our members’ “moments of truth”. Those decision moments are, say, on Thursday 7:15 pm or Monday 2:40 am when our member wants to relax, enjoy a shared experience with friends and family, or is just bored. They could play a video game, surf the web, read a magazine, channel surf their MVPD/DVR system, buy a pay-per-view movie, put on a DVD, turn on Hulu or Amazon Prime, or they could tap on Netflix. We want our members to choose Netflix in these moments of truth.

We win those moments of truth when members expect, based on their prior experience with us, that Netflix will be pleasurable, compared to all those other options. The pleasure comes from our simple experience for choosing, control over when to start/pause/resume the video, and from content that suits their taste and their mood.

When we deliver enjoyment, members watch more Netflix, continue their membership, and evangelize Netflix to their friends