Or whatever you call online video things. Via David Winer. Ze Frank rocks the joint. 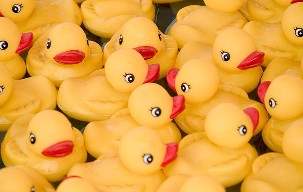 Jon Stewart watch out. I was about to say give him his own TV show and replace some of the boring yokels. Nah, he doesn’t need prime time, he has the world and he’s unrestricted. Anyone on broadband can watch Ze and they should.

The only close match here is the widly entertaining Letter to America. LTA in daily 3 min vidcasts would be fantastic.

This entry was posted on Saturday, April 29th, 2006 at 10:54 pm and is filed under blogs, irishblogs. You can follow any responses to this entry through the RSS 2.0 feed. Both comments and pings are currently closed.

4 Responses to “Funniest videocasts ever – Ze Frank – The Show”