Anton just confirmed that TechLudd is going to be at the Cork Airport International Hotel on Thu evening August 28th.

People from Cork, Waterford, Kerry and Limerick should consider coming along to this. Companies can also demo their products. Come along, g’wan.

As well as GMail, Twitter, WordPress, Bloglines and Meebo, the other web tools I use on a daily basis and a few times a day are Url.ie and Jazzbiscuit’s Image Search. They’re invaluable.

If I’m linking to anything on Twitter or emailing something to not so web savvy people then I’ll use Cathal Garvey’s URl shortening tool. It rocks. The latest version of it too produces a Q Code thingy, you know those new barcode things that some cameras recognize and turn em into urls?

Online pop culture anarchist JazzBiscuit has an absolutely fantastic image search service that brings back creative commons licenced images. I’ve been using it for months now to tart up my blog posts and add a bit of colour. Nice one Jazzy.

Try both out and bookmark them. They rock.

Any others worth mentioning? 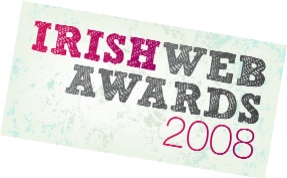 Finally got the press release out the door earlier this morning for the Moviestar.ie Web Awards on October 11th. Nominations open very soon. Like the Blog Awards it’s a two stage affair. Stage 1 will see every nominated (and nominations are free) website get judged using a scorecard. Specific scorecards for each category will then be used in Stage 2 by the judges. An awful lot of work went into making sure that the scorecard was good enough to keep the staunch standardistas and the pragmatists happy and I hope that concentrating on these important areas will help push for better websites in Ireland.

The category list is here and interest in category sponsorship is already strong. Wahey! Not everyone will be happy with the list and will want their own niche included but for year one, we’re content with going with that list. Changes as always will happen the next year. Sponsors cannot be nominated either to ensure transparency. We hope the 11th of October will be a fun night. Leave the tux at home folks, it’s more fun without it.

I’d very much appreciate if people would spread the word about the Awards and encourage their web development friends and colleagues who have become cynical about award ceremonies to have a look at this.

Sensationalist headline from the Tribune this Sunday: Internet providers refuse to fund web sex abuse hotline. So have you stopped beating your wife then? That’s pretty much the same line.

among the well-known companies which are not members of the Internet Service Providers’ Association of Ireland (ISPAI) â€“ and by extension are not financially supporting its Hotline.ie service â€“ are Digiweb, Magnet, Hosting 365, Smart Telecom and Lastmile.ie

Isn’t it odd that they can’t support Hotline.ie on it’s own but have to buy into the ISP Association if they did decide to voluntarily help in the reporting of child pornography online? Can other companies give financial support to Hotline.ie?

Why is an industry-run group tasked with logging reports about child pornography online? Well apparently our poor Gardai have enough to be doing, besides, you know, watching out for serious things like Child Pornography:

Paul Durrant, general manager of the ISPAI, told the Sunday Tribune the current approach, whereby members of the public can report suspect internet content to Hotline.ie, had been agreed after high-level discussions between the relevant authorities 10 years ago.

“If there is no hotline there, where are the public going to report to? Their local garda station, who have 101 things to do?” he added.

So maybe we let Toyota, Ford and Irish Toll Roads Ltd run an organisation that patrols our roads for people that commit serious crimes there? Same logic right?

If the Government really gave a damn about Hotline.ie wouldn’t they be funding it?

Nooked‘s website has been redone and they’ve launched a load of feed commerce website widgets. Feed commerce is a bit like VRM in that you control your shopping experience more by saying what you want and at what price and the offers come to you.

But Nooked allows you to display shopping widgets on your website, blog and social network profiles, the content of which you decide on and if your friends/visitors buy something, you get a cut. So you can have your own “Editor’s picks”. Be great if Google could offer the same for their not so great or relevant ads on their content network.

Right now they’re looking for UK based people to try this out as that’s where most of their partners are from. Hopefully they’ll expand into other areas and countries. Well done Fergus et al for this.