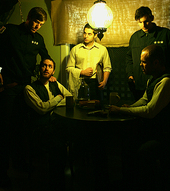 Seems I was able to register ucc.eu, bbc.eu, rte.eu via goDaddy if I wanted to. I know these were previously taken. I rang the people in charge of the .eu domain – Eurid who tell me all of these were taken in the sunrise registration period. Just chatted with Gavin who was able to register sex.eu even though there were 220 aplications during sunrise alone. There is going to be a lot of pissed off people today. Their whois lookup is also down. GoDaddy has stopped selling .eu domains on their site now. On hold with GoDaddy right now. Will update this post with more news as it happens.

So right now you don’t know if you have a .eu domain despite getting billed.

Found these folks via Sinéad.

It’s 1 o’clock on a Friday morning,
I’m trying to keep my back from the wall.
The prophets and their pawns have had another success
And I’m wondering why we bother at all.

And I think about how long it will take them to blow us away
But I won’t get me down!
I’m just thankful to be facing the day.
Cause days don’t get you far when you’re young.

And I’ll still think of you on cold winter mornings, darling
They’ll still remind me of when we were in school
When they could never have persuaded me,
That lives like yours, were in the hands of these erroneous fools

And to those of you who mourn your lives through one day to the next
Well let them take you next!
Can’t you live and be thankful you’re here?
See – it could be you, tomorrow, next year.

Yeah, not sure it’ll sell well in the Republic with that name. By Republic I mean the Cork one. Home of the other Ben and Jerry.

Mea culpa, Kieran over on Ice Cream Ireland blogged this yesterday. I was wondering what he’d think of this. Now I know.

How do you give an asshole more traffic and more groupies?

Link to him.
He or she* will get a lot of traffic by naming them too so if you are too lazy to use a link just use their name and you’ll build their audience. The Internet is funny like that. So if you truly dislike a blog or blogger then just ignore them. This is the attention economy and any kind of attention makes a site stronger. || Just in case people think this is a dig at Fergal or Team Tuppenceworth because that was the last post I made, it isn’t. I like the blog and respect them. Must stick em on my site blog roll whenever I unlazy myself to do it. This post stems from a private email conversation but I thought I’d stick my views on it links here.

*Does the word asshole have a gender btw?

Handy way of increasing Google Ads click-through. Is this within the Google rules?

Via BoingBoing is news that YouTube has done a deal with E! Networks. I’ve also read that all hosted videos have been restricted to 10minutes max. Shame about that.

Via Werblog is a Podcast from Supernova about online communities and what makes them tick. Well worth listening to:

The interview is a conversation with Craig Newmark (founder of Craigslist.org), Julie Herendeen (VP of Network Products at Yahoo!), and Bill Flitter (CMO of Pheedo). The podcast explores how to facilitate, nurture, and benefit from online communities, which are becoming not just major social forces, but significant drivers of business activity both online and offline.

Obey the speed limit and piss off everyone

Via the InsideGoogle blog is a Google video of people driving exactly at the speed limit and annoying everyone. Watch towards the end where they come over the rise of the hill. Reminds me of Convoy. This could easily be done in Ireland. 🙂

No, not that yank nor that one. No, not her either. Christ, we’ve a lot of the fuckers around these days don’t we? This is the interview.