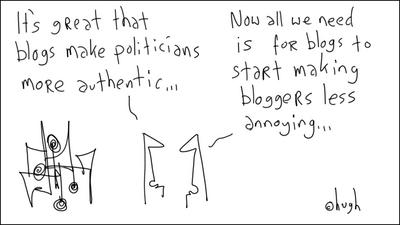 Above Cartoon by Hugh MacLeod.

Whoever could they be on about?

Communications regulator ComReg issued a statement on Friday responding to what it said are “a number of comments made in relation to ComReg’s quarterly report” issued this week. The main points of the statement were: since market liberalisation, telecommunications prices have decreased compared to the Consumer Price Index; based on IBEC figures, businesses are more concerned with energy, transport and waste costs than with telecoms costs; and Ireland is in a “relatively good position” for mobile phone prices at 7 out of 19 for post-paid, and 9 out of 19 for pre-paid. ComReg said it “strongly refutes” any charge that it is selective in presenting its pricing data which comes from researchers at Teligen and is OECD-approved.

Some brazen pup was in Metro, SiliconRepublic, Examiner, and on Newstalk, TodayFM, 5-7 Live talking about the sky-high telecoms prices in Ireland and that ComReg have been only selectively quoting figures and not informing consumers to the extent of the high prices in Ireland.

ComReg claim we are 6th cheapest and that we talk more so our bills are higher. Not true. Using a “composite basket for mobile” designed by the OECD, a report from the EU shows we are near the very top of the pricing tables.

Pg 49 50 and 51 of this EU report(large pdf file) breaks the mobile baskets into three types.: light, medium and heavy usage.

The structure of these baskets:

baskets are:
â€¢ Low usage basket with:
25 outgoing calls per month + 30 SMS messages
42% of calls are to fixed line phones, 58% to mobile phones

Each basket also has a unique definition of time of day distribution and call duration, and includes the monthly rental, and any registration charges distributed over 3 years.

When it comes to line rental charges ComReg said to day that it was relatively ok. We are now €9 a month more expensive than the EU average. We are €24.20 a month. Luxembourg is the second most expensive country yet is six euros cheaper a month. The EU average has decreased and the scary thing is we are due for another line rental hike. ComReg have blamed eircom AND the rural population for such prices. Surely Northern Ireland would have a price like ours too then or any of the Scandanavian countries? But they don’t.

Landline bills.
ComReg will mention national calls being some of the cheapest in the EU. They spin it like this is overall landline pricing. That’s only one part of a phonebill. There’s line rental, local calls and calls to mobiles. The OECD designed “composite basket” includes all these various prices and throws in x local calls y national calls z mobile calls per month.

Using this model from the EU shows that Ireland is second most expensive for landline bills. Again see that EU report I mentioned.

Broadband.
ComReg claim usage has doubled. Yeah but usage in other places as tripled. So? Double of 1 is the same as 1/10th of 10. Given the slower growth rate but a much higher usage rate in other countries, it means we are actually slipping in some tables. Don’t take my word for it. Talk to Forfas. A report yesterday from them stated.

It was very comical when they point blank refused to come on air on Newstalk but came on air on TodayFM with the stipulation that they would not engage with said brazen pup. It was funnier again when Matt Cooper stated their unwillingness to engage. This is the regulator who are meant to be looking after the consumer according to their charter. The brazen pup said they’re more of a poodle than a telecoms watchdog.

ComReg need to removed and replaced by people who know what they’re doing. Fire all the commissioners and directors. But why would a Minister do that when he can slyly blame them for his bad policies?

Reasons why students make great entrepreneurs. No kids, no spouses, no damned mortgages and not being burned out with life should surely help too. Robin is a (recently graduated) student entrepreneur. Are there more? Should almost all college courses teach entrepreneurial skills?

Muammar Gadafi of Libya has a blog

Making a career out of blogging.

This is a short movie which covers the opening pages of the Watchmen Comic. I’m quite impressed.

Robin Williams doing a Robin Williams on “Who’s line is it anyway?”. This guy was a coke addict. You got to wonder why he needed it.

Great advice from Fred Wilson on bringing someone in from the outside to run your startup.

Interesting concept video showing off the ability of an animation company. Thanks Andy.

The rm *nix command. Overheard on the phone. Ahh only geeks will get this.

Another cool use of the Mechanical Turk. This has to be the most innovative thing I’ve seen in that it is an api for manual labour.

The first bit of the post title is a quote from Lauryn Hill talking about how her songs and lyrics are changing.

The guy with a chocolate flavoured…

Bernie mentions the latest in a long list of feed spam, this time from Labour. It’s bad enough with the mundane rewritten press releases on some of their “blogs” but now we have Labour HQ polluting what was I thought our community noticeboard with press releases. We also have their flickr feed popping up photos of politicians and political wannabes all with their labour buttons or whatever.

It’s not just Labour though. Now we see daily posts about CSO statistics. It’s a feed not a damned blog. We have “blogs” giving us fashion advice. We have gossip tabloids now as well for the prissy and vapid demographics. What once was a great community site has now turned into a Las Vegas strip with many “blogs” being nothing more than audience traps to collect ad revenue. The passionate blogs are now being smothered with smiling TDs and Indymedia hippy rants.

I should really register Fluffy.ie for these almost regular blog posts and see can I get the site to No.1 in Google for the search term “fluffy”.

So let us begin:
Headline of the day. “Radioactive scorpion venom for fighting cancer”. Straight out of a Spiderman comic.

What’s the best way for advertisers to find out the amount of traffic that goes to various websites and the demographics for these sites? It’s not an easy thing to do. David Cochrane blogs about it

Hello to all the ANgry Spudniks who link to this blog. A lot. Thanks for the traffic.

Another one of those Geographic traceroute tools.

Some DNS tools. Handy those.

Political wire reports that Hilary hired Peter Daou to be her “Chief blogger”. Has she a Chief floorsweeper and Chief toiletcleaner too? Titles are great aren’t they? Daou is another blogger that worked on the Kerry campaign. We already know what Zack Exley is doing these days. Who’ll be Bertie’s Chief Blogger? Who’ll be rewriting press releases for Fine Gael? Labour already seem to have someone doing that. Sinn Fein, will they go with blogs, maybe not since they think their voters don’t have computers. Great quote from David Cochrane’s blog:

Adams: And what of all these policies, where can we find them?
Quinn: All of our policies can be found on our website
Adams: The people we want to represent donâ€™t have a computer

Check out the Art of Thelma Mansfield.

Posted in blogs, irishblogs | Comments Off on RTE Legend Thelma Mansfield and her art