Not a phone, a tricorder

In the science-fictional Star Trek universe, a tricorder is a multifunction hand-held device used for sensor scanning, data analysis, and recording data

I’m reminded of the launch of the original iPhone:

An iPod, a phone, an internet mobile communicator… these are NOT three separate devices! And we are calling it iPhone

It was such a leap, bringing about an interface of a glass screen with no physical keys and it had a simple menu system with everything available via touch and all in a nice thin (for a phone at the time) shape. It did well but really took off once people were able to develop apps for the phone. Then cheap and fast mobile data became available with 3G, 4G and now 5G.

Supercomputers and smarthorses
Now you have it or other smart phones as a core part of everything. I checked in to a hotel the other week and the staff checked me in via smartphones. They also took payments via smartphones. Square built their company on top of the iPhone and iPad. The iPhone is a platform that industries sit on top of now. Safecast launched to be a radiation detector after the Fukushima Daiichi nuclear disaster. Via an iPhone app radiation data was logged and shared. And another radiation detector powered by iPhone. Square brought out the cute card reader device that plugs into the headphone jack but pretty soon you won’t need that hardware device I should think.

We call them phones or smartphones but they’re supercomputers wirelessly connected to millions of other super computers and millions of databases of all the world’s information.
Phone, smartphone. It’s like calling a wizard’s wand a stick. Or calling a Tesla a smarthorse.

Tricorder
Now the latest generations with so many sensors in the cameras and wireless chips for GPS, proximity, low power near communications and very high speed broadband mean that these devices are also tricorders from Star Trek.

I think in the next few years phones will be used more like tricorders in that we’ll point or put them near things to get data. Remember those lenses do more than detect the stuff we see, things we can’t see like infrared and other light waves, maybe even heat can be seen by these lenses. So very like a tricorder. We’ll also use them as lenses thanks to augmented reality. This in fact is already happening with Google Maps, have you seen the AR interface when walking down a street? I used it in London recently and it’s great. Like up to then you’d come out of a train station and you don’t know are you walking left or right when you come out, not until the map says turn around. Now, just arrows. Like God mode in a computer game. 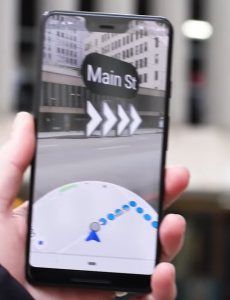 For a while now you can scan QR codes with your phone without using a special app. In China QR codes are a core part of doing anything with your phone. A16Z go through all the amazing things. But that is just one very basic way of using your lens. I say basic but wow, you can do so much with your lens by just scanning a 2d printout. Open your camera and look at the below QR code. It will allow you to log on to a password protected WiFi network: 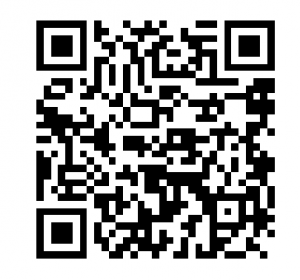 We’re unlocking our phones using facial recognition and Amazon allows you to scan objects with their app to find the product on their site. They’ve actually been doing that for nearly a decade but integrated it into their main app only recently. I’ve been showing off Flow for years.

Sick Bay
And now let’s move on to your wrist. The Apple Watch, already predicting heart attacks it seems. Nagging you to get up and move about. Telling your about your sleeping patterns. Calling 911 when you crash on your bike and get knocked unconscious. So the health element of the tricorders is already here and blood sugar testing is around the corner. And we have the Qualcomm prize too though the outcomes have yet to be reached.

The Qualcomm Tricorder XPRIZE was a $10 million global competition to incentivize the development of innovative technologies capable of accurately diagnosing a set of 13 medical conditions independent of a healthcare professional or facility, ability to continuously measure 5 vital signs, and have a positive consumer experience.

As the tech shrinks and becomes more powerful the footprint of your iPhone/Tricoder will shrink to your wrist and probably a ring around your finger. Or just a removable band on your wrist that you place on another person for monitoring.

What can you do?
So what can you to as a person or a business to prepare to our Tricorder future? Start playing around with QR codes to start with anyway. Add them to your branding. Do clever things that will get PR interest like that farm to table QR thing on products.
Come up with an app or idea that utilizes the full power of your pocket supercomputer with tricorder sensors.
Consider the near future and how people will use these devices to interact with the real world and the virtual world.
Just dream of this future.

This entry was posted on Friday, January 3rd, 2020 at 7:19 am and is filed under irishblogs, technology. You can follow any responses to this entry through the RSS 2.0 feed. Both comments and pings are currently closed.