Who the fuck is Alice? The present and the future

I don’t have the language or education to appreciate arts and culture and particularly plays but I do often feel that even the “modern” plays in Ireland are just variations of what has gone before. We have a world of Beatles cover bands, yet we need hip hop. Alice in Funderland is the Wu Tang Clan. It’s real, it’s present and it is genuinely capturing life and culture in Ireland right now. Junkies, taxi drivers, homeless, politicians, TV3. Some issues are timeless. Some are not. 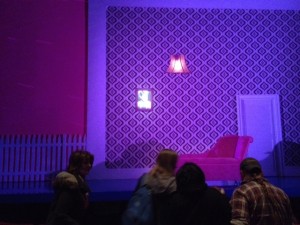 Dolores, the big bad is superb. The set rocks and the actors seem to have years of valuable experience behind them. Confident without being cocky.

Overall I think this is a piece of work to be proud of and worth bringing people to see. I’ll be going again.

This entry was posted on Tuesday, April 17th, 2012 at 11:39 pm and is filed under irishblogs, The Arts. You can follow any responses to this entry through the RSS 2.0 feed. Both comments and pings are currently closed.

One Response to “Who the fuck is Alice? The present and the future”