The Google Phone (again) now with GrandCentral and Jaiku and what if Cubic Phones got into the mix?

News came out in the past few days that the Google Phone/GPhone was not afterall going to be a hardware device and that Google was working on something like a competitor to Windows Mobile. Told you so. 🙂 Anyways, with the Jaiku deal announced yesterday, I thought I’d re-examine the Google Mobile software suite that I think they’re developing and add in thoughts on recent acquisitions.

First GrandCentral. With the purchase of this company, it means Google can now offer a single number for your phone or even a different number per country so people can phone local numbers but connect to you no matter where you are on the planet. You are free to create rules for that number so at certain times of the day, only family can call and everyone else is diverted to your desk phone or to voicemail. Certain numbers you can just block forever. Blocked number rings in? Send them to the spammer voicemail. Client number ringing in? Send them to the business answering service. Will this be one of the features on the Google Mobile Operating System? It should be.

Now to Jaiku. Dave Winer said that Scoble rang him and said the Jaiku deal was not about Twitter but about Facebook. Bollox to both reasonings. The Jaiku purchase was not about Twitter or Facebook or the threat from either, Google is working on something else to combat Facebook. Jaiku, in my view will be integrated into this Google Mobile Operating System/Suite that I believe will be able to work on a whole slew of phones.

Jyri himself from Jaiku pointed out how Tim O’Reilly thinks that the mobile phone addressbook could itself be the killer app for Web 2.0. Jaiku already has software for Nokia phones that does this. You can see who on your addressbook is on Jaiku and you can see their status. This is what it looks like: 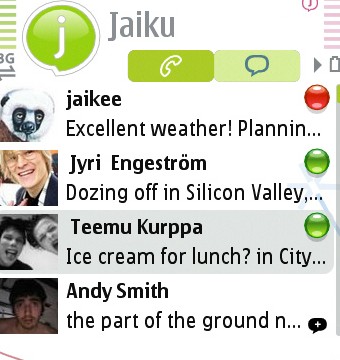 Now, imagine having a phone where all your contacts will also show a status (blank if they not using Google Mobile Services/GMail). Scenario: Ok, Jim is in a meeting right now, so I won’t bother calling. Fiona is also in the meeting but her status says she will reply to IMs, so you IM her from your phone. Change your own status to say you are in Denmark now, only important calls can be taken. Paul is on holidays so he says ring Jim. Julie is driving home, contact her after 5 instead. Gah. Notice how simple status messages are proving to be more and more important? This so reminds me of the inch speech in Any Given Sunday.

Jaiku is also perfect for saying where you are which can tie itself into the geotag information on Google maps. Tell Jaiku (or whatever it will be called with Google) where you are and it can tell you what are good places to eat nearby and it might even tell you if any business contacts are nearby.

Now for the Cubic phones. The key thing about them is that they have a sim card so sit on a normal mobile network but they also sit on a wifi network. Imagine the Google Mobile Operating system running on Cubic phones? Google is giving it away, so flash the Cubic phone to run it. You see your address book on your phone and a special icon next to those people who you can call totally for free and likewise they can see you are in a wifi zone so can call your from their PC or wireless device. Why do you need a €700 phone just for WiFi? The Cubic phone is cheap as chips, gives you WiFi and cheap roaming too and when on WiFi free calls to anyone on GTalk/GMail or on the Cubic service. Cubic already have deals with WiFi networks but imagine if Google, an investor in FON also said, “any phone with the Google Mobile OS can use FON for free calls and data”? And all without any lock-in with operators. I’m sure Google is hoping and praying that there’ll be lots more Cubic Telecoms in the not so distant future as they mess with the existing mobile cartels. I do too.

This entry was posted on Wednesday, October 10th, 2007 at 12:24 pm and is filed under irishblogs, technology. You can follow any responses to this entry through the RSS 2.0 feed. Both comments and pings are currently closed.

7 Responses to “The Google Phone (again) now with GrandCentral and Jaiku and what if Cubic Phones got into the mix?”