Myself, Gerry and Ursula (his missus) went to see Neil Gaiman’s Coraline as part of the Midsummer Festival. It was shown at beautiful the Firkin Crane Centre, pictured below. 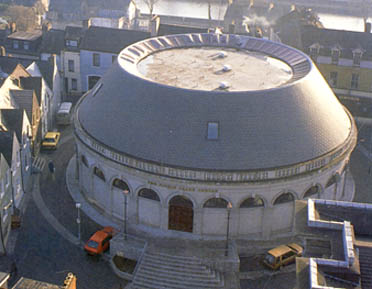 Coraline was classed as a family show though with scary elements so that kids under 10 were discouraged from going. Nothing really scary about it but then I’m not ten anymore, though sometimes act it. It was the never disappointing Gaiman blend of quirky humour, beautiful prose, dark elements and great imagination. Gerry said he’ll have to buy the book now. Now, next we need to try and persuade them to bring Wolves in the Walls over here.

Coraline can next be seen in Donegal in July.

This entry was posted on Saturday, June 24th, 2006 at 6:01 pm and is filed under blogs, irishblogs. You can follow any responses to this entry through the RSS 2.0 feed. Both comments and pings are currently closed.

2 Responses to “Coraline at Firkin Crane”