Named and Shamed – The Irish M.E.P.s who don’t give a damn about your privacy.

Tuppenceworth.ie has put up a shame list of how our MEPs voted on the EU Spy Law which monitors and logs anything we do online. Can I suggest emailing those that voted against this and thanking them and writing to the rest and give out to them for not giving a damn about you as a citizen. A soon to be severely monitored citizen who will no doubt have to pay for it with a much higher Internet or mobile bill.

Michael Arrington points out a podcast transcription service which priced at $10 for a half hour of audio is really really cheap, too cheap I think if someone wanted to make money from doing this. 30mins audio to me would mean around an hours work. $10 an hour is minimum wage in Ireland. How can someone hire a person to do this and make any money?

In the comments of the TechCrunch post people suggest that voice to text software be used and then someone goes over it to check for errors. That doesn’t make the work any faster as you still need a human to check the words and listen to the podcast.

I left the following in the comments of the TechCrunch post:

If I were a transcription company Iâ€™d be contacting the main podcasters and offering my services for free to them for 6 months in return for a link back to my service.

Tom, as a podcaster who is getting serious heavweights in the tech world to do interviews with you, would you be open to such an idea?

I wanted United Irelander to email me for a chat but he wouldn’t for whatever reason and wanted me to state on his comments why I was looking for a chat. But the fact that I didn’t want the judges of the Irish Blog Awards to be disclosed for another while meant I had to ask a person to be a judge in private. Oh well UI. I’m sure your replacement will do just as well.

Yup. I’m on it now. James Corbett convinced me. If you want to add me please do. I’m damien AT this domain.

Over on Newsroom.ie I’ve interviewed Clare Dillon from Microsoft. Have a looksee. (I should have permalinks for the interviews fixed by end of day.)

Interview with Donagh Kiernan from Maidsfield

You’ll need ID to use Net cafes now in Italy. Add Data Retention into this and everything you do online is going to be watched.

Internet cafes also must make and keep a photocopy of the ID and be registered with their local police station, dictates the law, part of an anti-terror package approved after the July terrorist bombings in London.

Ireland and it’s 3 year data retention is cited for a reason to bring in longer and harser data retention laws in Europe. To harmonize things they say. Next they’ll harmonize with Italy for Netcafes and with another country for prepayed mobiles. Like the way the EU and the US “harmonized” their copyright laws but instead of matching the lenghts they increased them more, back and forth like a tennis match. Why do the governments have so much disdain for their electorate?

Pic of the fuel depot explosion in the UK. More here and here.

Posted in blogs, irishblogs | Comments Off on Sunday 11th of Dec 2005 Links

Unconferencing in Ireland – More of this sort of thing

#1. We come to conferences to learn stuff, sure, but first and foremost for many of us, we come to connect. Speakers and panels kill networking time. Kill it. And really, since the advent of the internet, many of us would sit in our seats with our laptops pointing towards our email or Skype or the like, where we would be socializing with people back home rather than the very people we came here to connect with.

#2. Okay, so we do want to learn, but hell, the material isn’t always groundbreaking or earth shattering, is it? Well, the same goes here. But who cares? We have the back channel being projected behind the speakers, giving us an extra layer of knowledge to ingest. We often laugh, but there is a great deal of truth in those irreverent statements.

Dave Winer pushed the idea of an unconference and I think it is a fantastic idea. The best conversations happen in the hallways at standard conferences, the best conversations happened at the Digital Rights Ireland press conference at the tea and coffee table. How many people enjoyed school? The teacher up the front, you at your desk, bored to death. Conferences. Unless the speaker and presentation is as high a calibre as Dick Hardt’s OSCon2005 presentation people are bored with being lectured.

So Winer’s ideas make things a lot more fun and turn everyone into a presenter with just a facilitator to get things going. Or as Dave said:

At BloggerCon, there is no audience, there are no speakers.

There is a discussion leader, a person responsible for the flow of the discussion.

To get things started the DL talks for a few minutes, listing some ideas from the pre-conference discussion.

David Gammel posted a fantastic Conference v Unconference comparison list which is a good guide on how to run an unconference.

So what I’d like for say something for a discussion at somewhere like TechCamp.ie is the following:

A room without a podium, just a guy who starts off a conversation and then gets the crowd talking. The second room in TechCamp was perfect for this kind of talk. The table layout was O shaped so we could all pretty much see each other and comment while looking at each other which is good for interacting and expressing ourselves fully. Each talk should either have a discussion thread on a webforum or else a wiki page where everyone can add in links and comments or perhaps both.

I don’t think a backchannel would be needed for an unconference. The whole discussion would be the backchannel. Isn’t having a backchannel admitting that the lecture is boring and allows people to escape from it?

Of course unconferences aren’t for everyone. An unconference about blogging would be wasted on the businessman who wants to find out why blogs could be useful to him. You’d have people then talking about stuff way over his head. There are uses for the standard type of conference and the unconference where everyone is on the same wavelenght and there is no filling in of backgrounds. 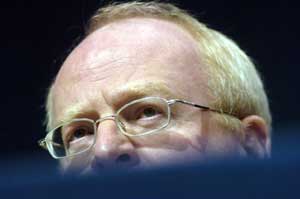 Imagine coming home one day to find the Gardai inside your house, going through everything, taking photos and taking fingerprints, questioning your neighbours, going through your photo albums. When you ask them what they’re doing they tell you they are gathering evidence on you and going back through three years of your activities. So naturally you ask what you are suspected of. “Well” they say, “we dunno, we’ll work on that next, but for now we are just gathering the information as it prevents terrorism.” “Remember Omagh”, they say and stare at you.

So such a thing would never happen. That’s far too big brother and so forth. Well it is happening now when it comes to your electronic and digital life. The Government brought in a bill which allows them to retain data on you for up to three years. Unilike a phonetap, a Minister does not need to approve this and there is no judicial oversight. There was talk that the EU might class such measures as these as illegal, however the Justice Ministers in most EU countries are now pushing a law through the EU Parliament which endorses what McDowell is doing, though to an extent that McDowell thinks is too weak. This EU Law needs to be stopped in its tracks. This law is being voted on in Brussels on Tuesday.

Here is a list of contact details of the Irish MEPs(Word Doc). I suggest downloading it and contacting every MEP from your constituency and tell them you did NOT mandate them to vote for a law that effectively says you are guilty until you can be proved innocent. Just to note Simon Coveney’s contact number ends in 417 and not as it states in the doc.

Every email, every website and everyone you call on your mobile is going to be noted. What’s worse too is that they are building an investigative system to watch you and then they’ll figure out crimes. Right now they are talking about “serious crimes” but the record companies want to class filesharing as serious crimes. So they could be given access to what you did for the past three years online. These record companies now are going after websites that display song lyrics for god’s sake. Recommending a song to a friend will have us sued next.

This is all being done to prevent terrorism says the Justice Ministers, except for the fact that terrorists are a clever bunch, that’s how they’ve been so successful in murdering and causing disruption. So they’ll just do what they always do and use their brain to get around these systems which is easy enough to do if you want to do it. In this draconian future there’ll be data on everyone except terrorists as they’ll be using encryption and other means to route around monitoring systems.

Of course I have more bad news. You’re paying for it all. All the telcos and ISPs have been told they have to pay for all these monitoring systems. They’re going to pass it on to you naturally. So, we have the highest mobile and Internet bills in the EU and they are now going to jump up yet again. There is a chance the Govt will subsidise the telcos and the ISPs but who’ll be paying that but the taxpayer?

Go email and ring your MEPs and TDs while you still can and while you can still afford to.

Keeping Track of my link trail – Thanks BoingBoing

Thanks to BoingBoing I have found what I was looking for. How’d I get here is a firefox extension telling you how you got to the page you have open, even if you opened it into a new tab. This is really handy for someone like me who has 130ish feeds in my bloglines and when I see something interesting I open it in a new tab and come back to it later on in the day or week and wonder who to credit for discovering it.