Not the best start to Open Ireland

Update: As predicted by Pat Phelan and myself in private conversations, his Twitter follower account and mine suddenly gained 20,000+ each after our blog posts on buying followers. Comments like “well you also have bought followers” were then passed on. Also, thanks for the threatening text message over the below post. Screenshotted for posterity.

Seán O’Sullivan (co-coiner* of the phrase cloud computing) launched his Open Ireland initiative this week and miracle of miracles he gained 15k followers on Twitter in a few hours. As the numbers skyrocketed he bragged about it and attributed it to the Open Ireland coverage.

Until people pointed out they were “spam” followers. AKA they were bought. Seán of course claimed no idea of how that happened. He said at first he thought it was a hacker:

Then later he said at first he thought it was a celeb mentioning him: 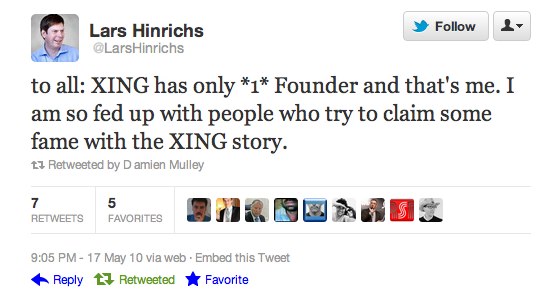 … had the same issue with these “spammers” going from 30k followers to 110k in a very short space of time. He too doesn’t know where they came from:

If I saw myself go from 30k to 50k to 100k followers and noted they were all spam accounts I’d be worried about my account security and would report it to Twitter.

Bill instead will Tweet about you for cash to his 25k (when the ads were starting they were this) and now 100k followers. This is what he is saying on his Fiverr profile. Oddly, this is also the site where you can buy “spam” followers! 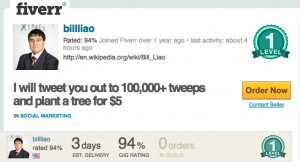 There’s been a lot of chatter on Twitter about faking follower numbers recently and also over on Pat’s blog. Experienced people can spot fakery but tell media people you are now followed by 80k people and they might not fully check, repeat it and one fake number makes you seem way more powerful than you are.

A conspiracy theorist though might suggest this was timed like that to do damage to the Open Ireland initiative. Or it might have been an intern going rogue. That happens a lot. Still, not the best start to this new intiative.

BTW, with past experience of blog posts of this nature I’m betting I’ll be classed as a bully, made people cry, I’m anti-Ireland, anti-jobs and more. I do admit to all of those and being anti-bullshit too.

This entry was posted on Saturday, April 21st, 2012 at 2:16 pm and is filed under business, irishblogs. You can follow any responses to this entry through the RSS 2.0 feed. Both comments and pings are currently closed.

9 Responses to “Not the best start to Open Ireland”