But before I give my opinion on this: Microsoft have no input into this at all. Holy Cow. This is a competing ad platform to the existing one running on Facebook that Microsoft manages. While the 240 Million dollars is small change for Microsoft, bloody hell, all they got was access to banner advertising while Facebook has control of a more highly targeted system?

Thanks to the analysis of Jeremiah Owyang on his blog I was able to make some kind of sense of what this ad system actually does.

To me this system appears to be the start of Vendor Relationship Marketing though in a kludgy manner. The new Facebook system allows a company or individual to basically create a profile or group for their brand or product. Instead of “friending” this brand, a person “Fans” this profile and it is listed under their friends listing. The profile owner though can serve ads on your profile. They can also show ads on your news feed when you interact with them on their profile. Also external sites can advertise in your feed when you interact with them e.g. Your feed will say you bought a book from Amazon and under it Amazon might offer you 5% off the same book OR a book that is more tailored to your preferences as with the ad system it caters to your profile. The last bit has the most potential.

Very much just an iteration on Facebook Flyers but they allow you to drill down and be even more specific who you can target, age, sex, workplace, college, likes and dislikes etc. Quite targeted but these via Facebook Pages and outside webpages allow you to place ads in the News Feeds of people. They do this by showing ads under the actions of what friends have done with facebook Pages or Facebook Partner websites.

This is pretty much your friend giving permission for you to put an ad on their friend’s News Feed. Not permission marketing as such is it? How many friends will you dump on Facebook when this kicks in wholesale?

These are profiles for companies or products. People “friend” or rather “fan” your Facebook Page. It works very much like a profile with a few exceptions. When you add a Facebook Page it goes into the Fan section on your own profile.

This is the screenshot of adding Jeremiah’s Facebook page: 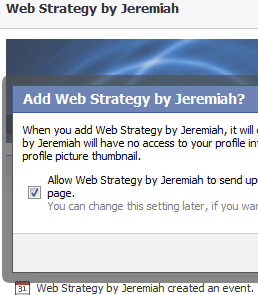 And this is how it looks on my Facebook profile:

All your friends also see this add in their news feed. This is now called a “social story”. When you interact with the Facebook Page by leaving comments and uploading photos and all that, that too goes into your news feed. Just like interacting with a friend. Each of the “social stories” has a link back to the Facebook Page so it is a handy way of increasing traffic to a profile. Then the Social Ads kick in. So you see this on the News Feed and under it is an ad for whatever that brand is BUT it is also tailored, almost sniper-like to your Facebook profile. So people in Ireland might see a different ad to someone in the UK or men see different ones to women.

This is clever. I like this. This is for external websites who want to get a foot in the door of Facebook. Like the example above. Buy a book from Amazon and it gets listed in the news feed of that Facebook member and you can attach an ad to it. Want 5% off the book John just bought? This is good in that to start with it won’t get astroturfed. It will allow us nosey human beings to see what people bought or what they did with external websites while that site can pique your interest with an offer. And that offer is tailored to your demographic.

This is just the stats part of the ad system. Seems basic enough for now but bound to change.

Groups: Why isn’t this offered to existing groups? C’mon Facebook people, with millions in some groups you could actually make more cash by allowing those group owners to do the same. Switch it on for them. Allow group members to opt in.

An ad network inside an ad network
If you build up your brand (Hey, remember Ze Frank is a brand) on Facebook and put a lot of hard work building it up, why not be able to make money by selling ads for other people and do it in some kind of automated fashion. If I have 100k followers, it would make me and Facebook money if I can allow some other people to send targeted ads to my subscribers without this advertiser going off and creating their own page and build up a following. Right now it only seems that I can spend money on Social Ads, not make money. Facebook people, yu do remember something called AdSense, right? Allow people to make money from their Facebook pages. Go on!

Where’s my kickback?
If my friends are reading my lifestream and seeing ads built around what I’ve purchased and done. What do I get back? I want a kickback

Will others rip this idea off?
You friggin bet. Now I sound American! Tumblr just got their revenue stream if they hadn’t already thought of this. Twitter too. I think we’ll also see RSS feeds of purchases become standard on all websites and people encouraged to stick them in their lifestreams via some kind of points thing. Get 5 points every time someone clicks on an item you’ve purchased etc. etc.

This will get people and advertisers next to the next step in advertising. Vendor Relationship Management. A post on that another time.

This entry was posted on Wednesday, November 7th, 2007 at 5:48 pm and is filed under Facebook, irishblogs, technology. You can follow any responses to this entry through the RSS 2.0 feed. Both comments and pings are currently closed.